Home / Headline News / Interview: Jon Fratelli, “Some songs are so incessant that they won’t let you ignore them. You could pretend to ignore them, but they wake you up at night.” 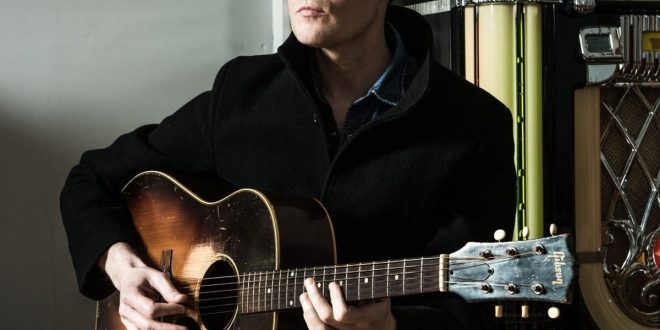 Interview: Jon Fratelli, “Some songs are so incessant that they won’t let you ignore them. You could pretend to ignore them, but they wake you up at night.”

The much-anticipated release of Bright Night Flowers by Jon Fratelli is set to make its debut on February 15h. The Scottish singer-songwriter takes us through the serendipitous conception and process in creating his sophomore album. We were able to learn what sets this album apart from his other works with The Fratellis and why country gothic is my next favorite thing.

ME: Firstly, congratulations on the release of the upcoming album, fans are very excited for your new solo material since your last solo release was in 2011.  After almost 8 years since Psycho Jukebox, how does it feel to have this project released?

Fratelli: Well, it’s nice to pursue it, I guess. In lots of ways, I’ve done some other interviews with people and the whole sort of solo album thing comes up. In a way, it was a solo album by accident. Because the whole thing was just… I had a bunch of songs and I was just curious. I knew that it was gonna be quite a lot involved. Getting to the end of it and sitting down and saying, “Okay, this is pretty much what I wanted to hear.” At that point, I really would’ve been happy to just stay unreleased but I was just too curious. But then it’s nice… I like the idea, you know, even if it’s one song or even if it’s half a song not even a whole record. The people connect with it, people seem to like it, then it creates this little community.  And I’m just as much a part of the community as the people who listen to it. It’s just nice to start this little communal thing.

ME: Your fans are very eager for Bright Night Flowers, which songs would you say you are most excited to perform for them? And why?

Fratelli: Again, I’m only doing two shows. I could’ve done more but for various reasons I kinda don’t want to.

Fratelli: Well, and even as far as those two shows, just for me it’s gonna be nice. To do something that is fairly different to what I do most of the time. Like the pace of this record is something that fits me really well. I kinda live life at the slowest pace you can imagine. Whatever  would be the opposite of high octane is, that would be me. And this record is just that. It’d be nice to play shows when I don’t have to be on like 100% manic energy.

ME: What was the experience of producing Bright Night Flowers with Stuart McCredie and Will Foster like?

Fratelli: It is really not that different to any other record that I’ve ever made. The whole thing is really easy. I don’t read much in the way of interviews with other people but I catch the odd article. I often almost hear people talking about the recording process being quite laborious. It can be tense. I just never found that. To me, it’s the making music for a living, making a new album, it’s the most exciting part of it. It’s never, I’ve never found it a process that was tense. Even when something’s not working, you’re like, “ Ok, this isn’t working. Now we have to change it.” I really just found the whole thing pleasurable ‘cause it’s really how I like to spend my time.

ME: As a multi-instrumentalist singer-songwriter and also producer did you find it difficult to know when to separate yourself from a song and say “it’s done” such as with “Evangeline?”

Fratelli: Yeah, there were other songs, “Crazy Lovers Song.” I wrote that song probably when I was 22 or 23 and I’m almost 40 now. So, that’s 17 years and that time, the very first version of it it was OK. But then maybe 3 or 4 years later it evolved into something else. That particular song probably has had 4 or 5 incarnations by this point. Really the thing is, it’s ready when it’s ready.  Some songs you don’t tweak at all. They just work. You know exactly what’s needed to make them work. And then there’s other ones that might take like that song–[Crazy Lovers Song] was probably the one I still tweaked the most. It was probably 4 or 5 months I continued to go back to it. It just wasn’t quite right yet. It was the one I worked on the most. Again, it wasn’t laborious, it was ready when it’s ready. If you have to tweak it for 17 years.

ME: The music on this album is a slower pace to what we’ve come to know from you and it is being described as, and I quote, “Soul-noir, country gothic…” Do you feel that is an accurate description of what Bright Night Flowers sounds like to you?

Fratelli: [Laughs] It is absolutely fine with me because it’s not my job at all to describe it. I always think of it a bit strange…I don’t know…strange. You know when people at a time dissect lyrics for instance, people have dissected Dylan for the last 50 years and it seems an odd thing to do to me. Because the song is its own explanation. It’s the same with anything–a painting, a movie, or a novel. It’s its own explanation. So to then try to explain what it meant…I get why people do it but it’s not something that comes naturally to me. So you could describe it as anything. Bubblegum. Anything. The more outlandish the description the better.

ME: It gets people listening.

Fratelli: Yeah! Because the thing is, you get 10 people listening to the same song and you’re gonna have 10 different interpretations of it. And that’s the way it should be.

ME: When an artist puts out a song, I enjoy not having the exact meaning of what a song should be. The song means something different to each person that listens to it because it transcends time, boundaries, and that makes it personal to each listener. Everyone has their own interpretation.

ME: I also read in my research that you are being compared to artists such as Tom Waits, Roy Orbison, and Glen Campbell. How do these comparisons make you feel?

Fratelli: Obviously I wouldn’t compare myself in any way to people. I think that there’s a fine line being inspired by somebody and then, you know, just copying them. And I’ve done that in my life. I’ve definitely copied people and it doesn’t work. There’s a really fine line and you know if you’re talking about someone like Roy Orbison, a fool to try and replicate that. Who would do that?  A crazy person would do that. But if you have a set of ears kind of open then you just can’t help it. You can’t help to take in whatever you may hear. Even at the grocery store and they have music on, without meaning to you’re gonna take it in. But I’m not foolish enough no to try and copy them.

ME: My last question before I let you go,  between 2011 and 2018 you also wrote and Eyes Wide, Tongue Tied, We Need Medicine, and In Your Own Sweet Time for The Fratellis. What was the creative transition like between Bright Night Flowers and those three other albums? Does it come naturally or do you write with a clear distinction between both projects?

Fratelli: This is why this record was completely accidental, because when I was writing the songs for the last Fratelli’s record, which we released last year, so I think I must’ve written those songs in 2017. I just find myself naturally, in this 3 or 4 month period leading up to recording that record, I just found myself naturally needing to…I have periods where I moved away from this rate of record. So I would just find myself sitting at the piano and having a real need to play around something that was the complete opposite of what I was working on for the Fratelli’s record.  And before I knew it, there were 4 or 5 nice, meandering sort of piano songs coming out of that. So again, it’s completely natural. That’s why I said that the whole solo record thing is kind of quite comical. It kind of implies that you said, “You know what? I really have to do something separate.” And that wasn’t the case at all. It’s completely driven by just the music. If the songs hadn’t come out when they did I would have no compulsion to make a record separate from the band. They came up and you could ignore them if you want. Some songs are so incessant that they won’t let you ignore them. You could pretend to ignore them, but they wake you up at night. They tap at your window they basically bug you.

Fratelli: And that’s why I’m saying you can pretend to ignore them. It’s like if you had a pain in your leg. You can pretend it’s not there for a few days but if it keeps coming back, you take care of it.

To learn more about Jon Fratelli make sure to check out the links below:

Concert lover, music fanatic. If it sounds good to me, the rest doesn't matter.
@njaziaddict
Previous Gallery: Interpol + Sunflower Bean at The Moore Theatre in Seattle, WA 02.02.2018
Next The Empty Mirror – The Mere