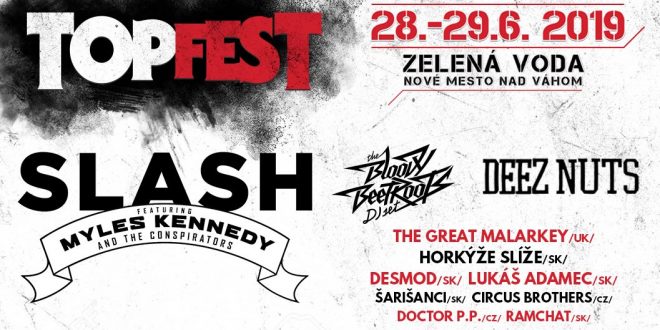 TOPFEST reveals another name! In Nové mesto, the hardcore group Deez Nuts will play and release their core hell. Slovak fans will be able to enjoy these Australians on June 29th. One of Slovak best festivals will be held on its home scene again – in the Zelena voda area in Nove Mesto nad Vahom. At the 16th TOPFEST, Slash will play with Myles Kennedy and The Conspirators and Horkýže Slíže, Doctor P.P. or The Circus Brothers.

When the renowned Australian metalcore lineup I Killed the Prom Queen broke up in 2007, her drummer JJ Peters decided to drop the drumsticks and plunge into his own music. When this hip hop, hardcore and punk musician released his first Deez Nuts album, listeners could listen to the music that came exclusively from JJ Peters. He recorded all the instruments and vocal parts himself. He soon put together a band that quickly gained the reputation of being an excellent concert group.

“We’ve prepared a hardcore party at TOPFEST like you’ve never seen before. Four guys will play songs they like and which, we hope, you like. We love the gigs and gigs, that’s why we live, ”said JJ Peters, the band’s leader.

During the first European Deez Nuts tour, which took place alongside Bring Me the Horizon in 2008, they released their debut album “Stay True”. So far, the latest album “Binge & Purgatory” was released in 2017. Deez Nuts offer a great live show, which they will also show at TOPFEST. The band is characterized by specific chemistry with European fans, which Australian musicians greatly appreciate.

“We have already performed in Slovakia and have always enjoyed it. People were nice and friendly before the show and energetic and aggressive during the concert. Perfect combination. In Europe, the audience is faithful when such a fan finds you once, follows you for years. Everywhere else in the world people want something new again. I’ve seen them many times, but ok, but I’m already coughing … While they say in Europe: I’ve seen them a few times and it’s good! I’m looking forward to seeing it now! ”Says JJ Peters.

DeezNuts will perform at TOPFEST in J Peters – vocals, Matt ‘Realbad’ Rogers – guitar, SeanKennedy – bass guitar and Alex Salinger – drums. PP Come to experience the perfect festival atmosphere at TOPFEST 28 to 29 June 2019 at Zelená voda in Nové Mesto nad Váhom, in addition to concerts, you will also find great attractions. Tickets are available at Ticketportal.sk at https: // www. ticketportal.sk/Event/TOPFEST_2019You can buy a festival ticket for 40 euros! All information is available at www.topfest.ska https://www.facebook.com/search/top/? Q = topfest