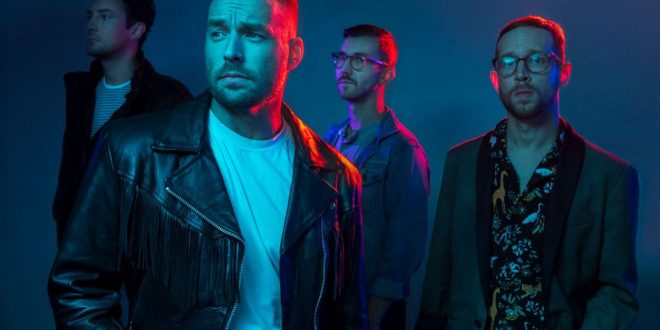 This time around, Kentucky alternative outfit Emarosa have earned massive acclaim for their championing stylistic freedom. The Lexington quartet is led by Bradley Walden, who has carried them through various permutations since their forming in 2010. With Peach Club, slated for February 8th, Walden showcases his newfound accessible range, in the form of retro pop magic he grew to love through childhood. Reflecting on the integration of these influences, Walden says, “I think a lot of it was based on what we were raised listening to. My mother raised me on female pop and R&B. It was Paula Abdul. It was Michael Jackson. It was Janet. It was even some Shania Twain.”

Indeed, Peach Club’s opener, “Givin’ Up,” does channel subtle 80s hook-laden allusions, exhibiting sleekly funkified backing and punchy soul to boot. The subsequently balladesque moments to follow in co-lead singles “Don’t Cry” and “Cautious” fare just as well in acknowledging those sensibilities, with prominent synth textures strengthening the album’s pace. There is an unmistakable modernity about them, though, which does its part in fleshing out the evolution of Emarosa’s artistic identity. Further highlights in “Help You Out” and “Hell of It” are more electronic-oriented, as well as they add a decent sense of realism to offset the initially euphoric façade. This transition of styles is gradual, which additionally emphasizes the amount of patience in creating a truly immersive listening experience.

Peach Club will stand as the successor to the dominantly post-hardcore-driven smash, 131. After three years in the making, the revelation of its bearing a deeper, more dear-to-heart scope of influence comes across as sincere, not to mention refreshing. However, with the album’s release date mere days away, only time will tell how well it fares once the full spectrum Emarosa’s fanbase is considered.

I come from a family who is passionate about all things music. I learned to sing at an early age, and by 13, had my very own Fender Strat guitar. I tried my hardest at learning all that I could. Because I was born with cerebral palsy, I had to teach myself an adaptive playing style. I learned to write and record my own music, despite these difficulties. In college, I started making great use of my writing abilities by reviewing music, as well as copy editing. I guess it's best to stick with what you know, while welcoming a fair challenge at the same time.
Previous Illusive Release Minimalistic Metalcore Music Video for “Divide”
Next New Danko Jones album ‘A Rock Supreme’ Due April 26; Tour Starts Tomorrow