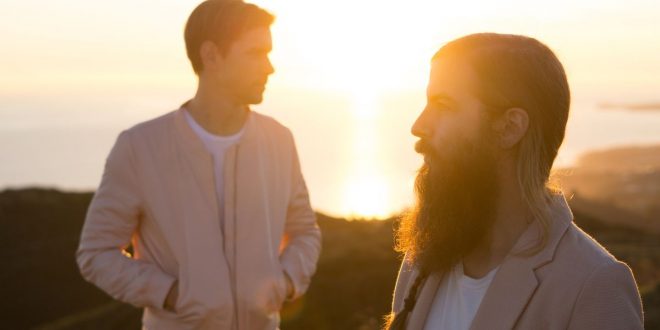 If only more of life could feel like . Their music insists upon a certain kind of scene, where time slows down, is perfect, and suddenly the movie of your life just got a .

DNDR’s ability to inject everyday life with that feeling of enchantment comes from the combination of Ludwig Jonsson’s dream-like, Avicii-esque production and Ola Palsson’s soaring tenor that sounds like what you might have had if Bon Iver hadn’t found his voice in the middle of the woods in winter, and instead found himself blissfully belting at Coachella.

The two come from opposite ends of Sweden, where they never crossed paths until they both found themselves in LA pursuing music from opposing ends of the spectrum: Ola came from punk and indie roots, where Ludwig started in the world of electronica. They quickly realized they had the same goal. “We wanted to create music to make crowds dance to let people escape reality for a moment,” Ludwig explains. It turns out their talents combined perfectly to do just that.

Emerging in late 2018, the band turned heads at major tastemakers such as NYLON and Alt Press, and found a new home signing to Kobalt’s AWAL Music.

Last week DNDR released “Fell Out,” another track from their forthcoming debut EP, All We Know, springing to life like the perfect night at a festival. Ola’s voice careens over the heads of the crowd, buoyed by the unbridled joy in Ludwig’s synths. Asked to describe their sound, Ola replies, “I’ve always been more influenced by emotion or a feeling, rather than a specific genre.” The pair is an embodiment of hope itself, as long as hope itself is a tireless dance party.

All We Know is that party, a starry-eyed collection of tracks you would expect to hear scoring the best nights of your life. But even in those more normal times, where time isn’t moving slowly, and the lighting isn’t perfect, All We Know can bring those nights to you, infusing the most humdrum moments with the kind of energy and wonder you usually can only buy with a ticket.