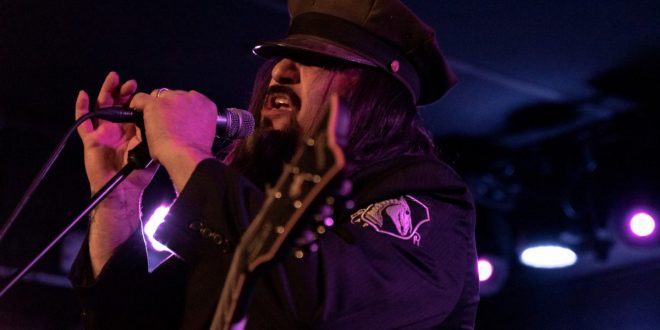 After six long years the Brooklyn based gothic doom rockers A Pale Horse Named Death have release their third LP When The World Becomes Undone. With the release of their latest LP the band held a small intimate record release show on Friday January 18th at New York City’s Mercury Lounge. As frontman Sal Abruscato cracked jokes with the crowd during their set he also made it clear to everyone that he was in the best place of his life and he didn’t care what all the haters had to say, referring to returning back to their gothic and doom roots with the new music. Throughout the set the band bounced around playing old and new material in no specific order which to me somewhat hindered the set a bit as it seemed to take the steam out of the show. Overall the crowd enjoyed themselves and the reception to the new music seemed overwhelming to the band.

NewYork Based Photographer. Music Enthusiast with a background in Graphic Design. Whether I'm shooting a live event or just out wondering the streets its about capturing the moment.
Previous GRAMMY NOMINEES BRING ME THE HORIZON RELEASE “MOTHER TONGUE”
Next Soulfly to begin 2019 leg of Ritual tour – Interview with Max Cavalera