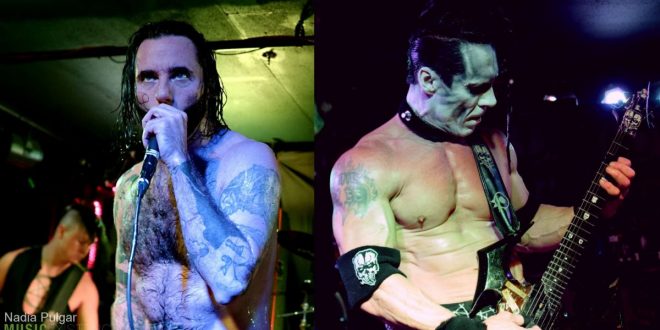 During the last four months, I had the absolute privilege and honor of witnessing the rock-n-roll machine that is Doyle across multiple dates of their As We Die World Abomination Tour 2018. Doyle never ceases to impress me with their hard-hitting love songs and in-your-face undiluted passion. I was able to see the band at various stages of the tour and not once did they slow down the enthusiasm. Every night was just as intense, raw, and charismatic as if they were still in the first week of touring.

Their final show at the Brooklyn Bazaar in New York the ferocity was no different. Frontman Alex “Wolfman” Story was owning the stage and winding everyone up with his antics. Being playful with bassist Brandon Strate, tangling him up with gaffer’s tape and the mic cable. All the while drummer Wade Murff was pounding the heavy and fast heartbeat of it all. Dominating the entire venue with his larger than life performance and onstage presence, Doyle Wolfgang Von Frankenstein.

Doyle bridges an undeniable age gap, seniors vying  for the front row while young children wriggled their way to the barricade between their taller competition. This kind of fandom is only achievable when artists create music that permeates the limitations of the imagination and brings life to those stories at their shows. I am not ashamed to admit that I will miss my monthly “abomination” appointment with the Woo Woo Boys.