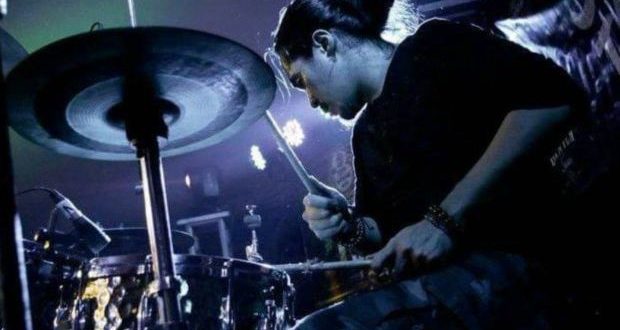 At 9:45 yesterday morning, Brian Velasco, drummer for the iconic Filipino hard rock band Razorback, was discovered lifeless by police on the ground floor of a condo in the district of Malate, Manila. Velasco had initially begun a chilling farewell monologue on a now-defunct Facebook livestream for family and friends. He would then end his statement by simply saying “Pakialagaan niyo na lang si (trans: ‘Take care of’) Pochito, okay? Here we go. Here I go,” before plummeting down 34 floors.

On November 20th, his 41st birthday, Velasco was reeling from the loss of his ailing and beloved pet dog, Alfie, and struggled to keep high spirits, writing in a tribute post, “Up and down ride without you, young man. Daddy loves you.” As confirmed by music promoter Dudee Alfonso, it was revealed that Velasco had deliberately intended to fall to his death in completing an elaborate suicide.

Back in early 1996, 19-year-old Velasco was gaining traction as a burgeoning drum instructor at an RJ Guitar Center. At the same time, Razorback front man Kevin Roy, guitarists Tirso Ripoll and David Aguirre, and bassist Louie Talan, were looking for the successor to original drummer Miguel Ortigas. Velasco, being one of only three participants in the audition, felt positive about the experience despite arriving late.

He discussed this meeting further with Wolfgang front man Basti Artadi in a 2013 band interview for RadioRepublic:

“There were two other guys auditioning, [including] this Australian guy. More than anything, I wasn’t nervous; I was just happy to play,” he says confidently. Ripoll elaborated on their decision, “You have to remember. Brian was an instructor, so he knew what he was doing, but he didn’t hit right; he hit like a girl. We were like, ‘Nah, you gotta hit harder (laughs)!’” Eventually, Velasco’s nailing the audition was also based on two other essential qualifications – his sense of hygiene, and his endearing personality. Ripoll continues, “We realized that we could either spend two hours in a van with a smelly guy who can kind of play, or with someone who can learn to hit hard and is a really good friend. “—and who smells good,” Artadi interjects, laughing. Ripoll then sums up his choosing Velasco, stating, “[Musical skills] you can learn, but you can’t teach someone to be a nice guy; you can’t teach someone to be a real brother.”

Velasco’s transition into Razorback was equally fruitful and longstanding. He would join just in time for the recording of the band’s seminal sophomore effort, Beggar’s Moon. Released in April of 1997, the album drove them to explore impressive creative heights. It was by this point that listeners were drawn to a new side of Razorback. Building upon the Ortigas-driven, southern rock inspired foundation of 1995’s Hebigat Sounds Volume 1, Velasco would contribute a more involved, prog rock approach, particularly on longer pieces such as “Seer of Visions,” “Temple,” and, most notably, the signature two-part opus in “Beggar’s Moon/Tie Dye Sky.” The album proved to be their breakthrough from a mainstream perspective as well, being their first major label outing via Sony-owned Epic Records. Amidst initial headway, its carrier single, “Ikot ng Mundo” (trans: Cycle of the World), would top NU 107’s Midnight Countdown for seven consecutive weeks, as well as earn them an Artist of the Year nomination in 1998. That same year, the album would be certified platinum.

Alongside Razorback’s subsequent Epic full-length, Star (which spawned a smash hit in “Voodoo, Who Do?”), this combined success propelled them to full-scale venues, sharing bills with such renowned western acts as Metallica, Rage Against the Machine, and Silverchair.

Considering the twists and turns that Razorback would face through later releases, involving numerous personnel changes, ditching a record label altogether, and recently, the similarly shocking exit of longtime front man Kevin Roy, Velasco remained another of the band’s most enduring assets. On the day of his passing, Razorback expressed a testament of his impact on the band via Facebook:

I come from a family who is passionate about all things music. I learned to sing at an early age, and by 13, had my very own Fender Strat guitar. I tried my hardest at learning all that I could. Because I was born with cerebral palsy, I had to teach myself an adaptive playing style. I learned to write and record my own music, despite these difficulties. In college, I started making great use of my writing abilities by reviewing music, as well as copy editing. I guess it's best to stick with what you know, while welcoming a fair challenge at the same time.
Previous The Maine debut new song “Numb Without You,” detail new album.
Next Seattle-Based Hip Hop Duo Starghost Drops Debut Video