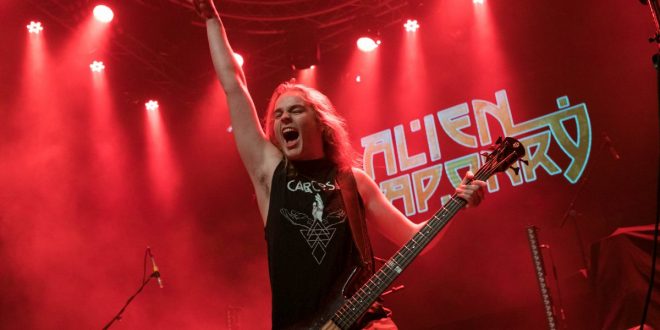 This is you guys’ first time in the US, how’s tour been so far?

It’s been very good! You know, it’s been really cool to show up at these shows and there actually be people there specifically to see us. We never really expected to see people actually singing along to our lyrics and actually know who we are. It’s been cool to meet some fans after the shows and have lots of fun during the shows as well.

It’s cool because we get the occasional fans that are like “oh we learned Māori because of you guys’ band” which is, you know, it’s not a language that you can use around the world, that’s something that you can only really use in New Zealand. So fans that have gone and done that is really cool to see.

What’s been your favorite show of the tour so far?

Oh that’s a hard one. I’m gonna have to narrow it down to 3. So, first was New Mexico. Which was our only headlining show of the tour and was an awesome show. So many people came out and everyone absolutely loved the band and it was just a really good vibe. Toronto, Canada, that was a really awesome venue and so many people came to the show. I think it was sold out a month before and we had a really insane crowd at that one. And actually this show (Dallas) was really awesome tonight. Not only because of the way everything went but it’s a great venue as well and all the fans that came up to meet us after.

What has been your favorite and least favorite thing about being over here?

Favorite thing about being over here… hmm there’s been a lot of favorite things. Honestly just playing the shows and getting to meet all of our fans over here. It’s been amazing. There have been people who some of them have been commenting on our Facebook posts and stuff for like a year, a year and a half, so to finally be able to come over and meet those people is really great.

As far as the worst stuff, for me it’s been lack of sleep and eating crap food. Like, that is just the worst combination and it’s something you do constantly when you’re touring. We try hard not to do that but sometimes its unavoidable.

How has it been touring with Ministry? Is that something that you ever imagined you would be doing?

When I was 5 years old I had one of those like brick Nokia phones and I had Psalm 69 on there and I used to play it constantly. That was my album of choice that was like the only album I had on that phone, Psalm 69.

I think before we came on tour you can see a lot of stuff especially from, well pretty much all of it, from Al’s early age when he was doing some pretty crazy stuff. So I was like ahh what’s it gonna be like? Is it gonna be a bit scary or whatever. But we were all really surprised, pleasantly so, when we first showed up at that first gig. Al saw us and had this massive smile on his face and he came and introduced himself and you know, the whole band has just been really cool to us. I don’t think they could be nicer people so it’s been really good.

Even the crew is great. All the crew are right into it and everyone helps each other out with things that go wrong. Like yesterday, it was a terrible venue and so everyone was struggling to set up on time and I mean, I was on stage like 5 minutes before we had to play still trying to sort out an issue. But everyone just pulled together and got everything sorted.

I also wanted to ask a little bit about your incorporation of Māori into your music. Was that something that you knew from the start you wanted to do or how did that come first come about?

I guess we were first inspired by some of our friends who play in a band back in New Zealand called Strangely Arousing. They entered a competition in which you have to incorporate your indigenous language into your music. They had a song that had a Māori verse in it and we’re actually really good friends with them and we thought it was a really cool song. A couple of them are metal heads as well and used to play in a metal band and so I guess we were all kind of inspired by that. But we were kind of experimenting and we thought what if we just write a song that is completely in Māori and make it hard-core just thrash metal. And people just lost their shit when we did that, we weren’t expecting it at all. The response we got from that first song we did in Māori was amazing and so from there that’s kind of when we decided we were going to start doing that.

You guys released your debut album back in June, were you expecting the reaction you got from it?

It’s been really cool, especially the reaction we’ve gotten overseas, especially in America. I mean pretty much straight away NPR picked it up and you know SiriusXM have been playing it a lot lately.

I feel like you can’t really have any expectations when it comes to releasing music you kind of just have to release it and just let it do it’s thing and see what happens you know? But yeah, we were actually really blown away that it got played on public radio and it blew up in America.

I think thanks to that it’s now had over 2 million streams on Spotify which has been really crazy. And a large number of our fans are over here in the US and I think SiriusXM and Jose, he’s helped a lot with that, and a lot of people who are coming to our shows that’s how they heard of us. Either that or a friend of theirs heard us on SiriusXM and then told them about it. It’s been amazing.

Lastly, I feel like every interview you do your age has to come up at some point. I know you guys formed when you were super young, but can you tell me a little bit about how you formed the band?

Well originally me and Lewis started Alien Weaponry in 2010. So I was 10 years old, Lewis was 8. So that was just kind of us jamming in the lounge, we had one song that was terrible. For a long time we just had one song and then we moved up to Waipu, met Ethan in 2012 and then kind of started writing songs and going from there and yeah, we’ve been a band since. So 2012 is really when we formed.

Previous JOYOUS WOLF to Join BUCKCHERRY on WARPAINT TOUR!
Next FAREWELL TO FEAR Release Official Music Video for “YOUR CURE”