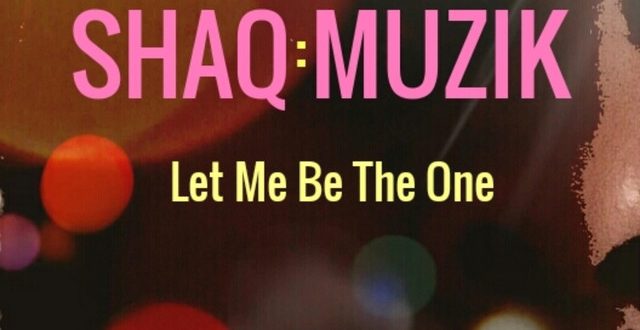 ShaQ:Muzik delivers a smooth urban pop jam in his all new single “Let Me Be the One,” which is out now everywhere independent music is sold and streamed. The UK-based producer pulls out all the stops in his latest release and builds on the psychedelia-tinged sound he introduced us to with the Grammy-nominated “My One & Only Love,” skewing a spacey, atmospheric backdrop with relevant rhymes that evoke powerful, sexually-charged emotions that are as much a part of human nature as eating or sleeping is. “Let Me Be the One” is stylish, streamlined and affectionately larger than life, but above all else it’s a flex of musical muscle from one of the underground’s most exciting young talents.

Inside the master mix, the vocals essentially float above the rest of the instrumentation. They’re tapered to the fat bassline that seems to push us along from the start of the song, but in no way do they ever become indistinguishable or melded into the rich texture of the synthesized backing track. Everything about “Let Me Be the One” is over the top, but only within the parameters allowed by ShaQ:Muzik’s melodic singing. About halfway through the song, it feels as if the bass is going to straight spill out of our speakers and into the physical world, but it’s his erotic crooning that reigns in the music and keeps it grounded to earth.

As is the case with most modern R&B ballads of this persuasion, the lush bottom end is meant to be the center of our attention when we look past the lyricism and into the bones of the track. ShaQ:Muzik is careful to avoid being drowned out by the bassline though; at no point does it penetrate the space occupied by the vocals, despite having numerous opportunities to do so. As broadly stylized as this song is, it’s actually sporting one of the more meticulous arrangements I’ve heard in some time.

The drumming is probably the most organic element to behold in “Let Me Be the One,” hollowly echoing the churn of ShaQ:Muzik’s vocal delivery with an understated, pulsating rhythm that is as captivating as any other component of the song is. Unlike a lot of his American contemporaries, ShaQ:Muzik doesn’t feel the need to generate his grooves out of walloping percussive parts exclusively. He prefers instead to create layers of soft, swinging beats that collectively produce a lumbering tempo free of the predictably tinny sound that stock drumming often creates, which instantly makes this track feel a bit more exciting than the rest of what’s out there right now.

While it inarguably features a mix that is thick and wonderfully overindulgent, “Let Me Be the One” remains a sleekly designed, easygoing R&B single that doesn’t ask a lot from its listeners in return for the massive tonality that it brings to the table. ShaQ:Muzik has been on quite the musical odyssey over the last year or so, and from a critical point of view this is easily his most robustly constructed piece of material so far. There’s still room for him to expand on this template a tad more than he has, but if you’re looking for hot R&B that pushes everything to the limit, you’d be hard-pressed to find a better track to start 2019 off with.