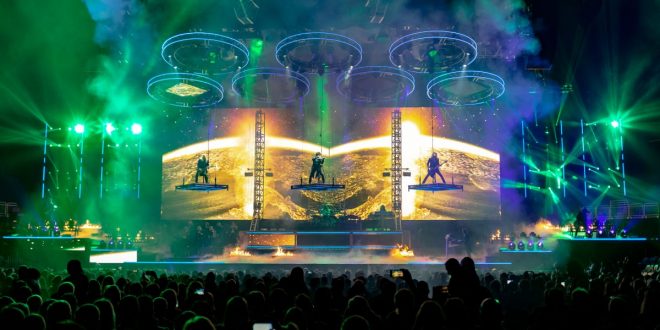 On a chilly Saturday afternoon in Newark, New Jersey lines packed with fans, some entire families made their way into the Prudential Center for the first of two shows that day of the holiday-themed rock opera Trans-Siberian Orchestra. The Ghost of Christmas Eve Tour marked 20 years for TSO. As the lights went low at the start of the show, fans who had been waiting with anticipation began filling the arena with holiday cheers. With fog filling the base of the stage along with strips of pyro, giant screens projected travel through the atmosphere around the moon and the start of an incredible light show began while guitarist Chris Caffery, violinist Roddy Chong and bassist Tony Dickenson played on separate platforms hoisted above the stage.

While the narrative storyline parts are told by Bryan Hicks the back half of the stage transforms into a full theatre marque. The show runs for close to three hours and the production is beyond amazing. The stunning visuals of the show include stage transformations, a ton of pyrotechnics, an incredible laser light show, and even snow falling from the sky. The intimacy fans are treated to at different points in the show by guitarist Chris Caffery, Joel Hoekstra and violinist Roddy Chong as they play through the isles on their way back and forth from the swing arms at the soundboard that hoist them high up over the crowd and at points stopping to give fans guitar picks sets the mood of a small night club venue over a large arena. One thing that really stands out making these shows special is the use of a local orchestra from each city the tour stops at.

With this being a regular holiday special I’m already looking forward to seeing what TSO has in-store for next year.

NewYork Based Photographer. Music Enthusiast with a background in Graphic Design. Whether I'm shooting a live event or just out wondering the streets its about capturing the moment.
Previous Caroline Ferrante Releases Beyond EP
Next Dolla Bill Drops New Single