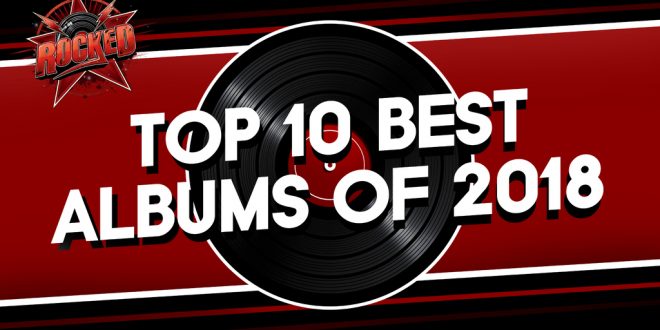 A countdown of the best albums from rock, metal, alternative and beyond in 2018!

Firepower is the eighteenth studio album by British heavy metal band Judas Priest. It is the first studio album since 1988’s Ram It Down to be produced by Tom Allom, and the first one with Andy Sneap as co-producer.  The album sold around 49,000 copies in the United States within its first week of release, debuting at No. 5 on the Billboard 200 chart, making it the band’s highest-charting album in the US.  Music videos were made for “Lightning Strike”, “Spectre” and “No Surrender”.

Is This Thing Cursed? is the ninth studio album by American punk rock band Alkaline Trio, released on August 31, 2018 on Epitaph Records.  Produced and mixed by Cameron Webb, the album was announced alongside the release of the lead single, “Blackbird”.

Lovebites released their second album Clockwork Immortality on December 5 in Japan. Limited editions of the album include a DVD or Blu-ray of their first concert video, Battle in the East.[18] It was released in Europe, Australia and New Zealand two days later by Arising Empire/Nuclear Blast, and in the UK on January 18, 2019

Ordinary Corrupt Human Love is the fourth studio album by American band Deafheaven, released on July 13, 2018 through Anti-.  The title of the album was inspired by Graham Greene‘s 1951 novel The End of the Affair.

Holy Hell is the eighth studio album by British metalcore band Architects. It was released on 9 November 2018.  It is the follow-up to the band’s previous album All Our Gods Have Abandoned Us, and is the first recorded without founding member and main songwriter Tom Searle, following his death in August 2016.

Eat the Elephant is the fourth studio album by American rock band A Perfect Circle. It is their first album release in fourteen years, after 2004’s Emotive. While early work on new material traces back to as early as 2008, years of slow progress would ensue due to issues between the band’s chief music writers, frontman Maynard James Keenan and guitarist Billy Howerdel, largely stemming from their commitments to other projects and inability to come to an agreement on the direction to take the band. Renewed focus, alongside assistance from music producer Dave Sardy, helped propel the band into much more productive sessions across 2017, with the album being completed in early 2018.

Electric Messiah is the eighth studio album by American metal band High on Fire, released on October 5, 2018 through Entertainment One Music. It is the band’s third album to be produced by Kurt Ballou, and it serves as a tribute to Lemmy Kilmister of the band Motörhead. On August 6, 2018, Electric Messiah’s title track was released early for streaming. On October 3, 2018, the band released “Spewn from the Earth” as the album’s second single.

Erase Me is the eighth album by American rock band Underoath. It is their first album in eight years following Ø (Disambiguation) (2010), marking the longest gap between two studio albums in the band’s career, and their first one with founding drummer and clean vocalist Aaron Gillespie since Lost in the Sound of Separation (2008). It was recorded in mid-2017 with Matt Squire and mixed by Ken Andrews. The album was released via Fearless Records on April 6, 2018.

Year of the Tiger is the debut studio album by American musician and singer-songwriter Myles Kennedy. His first release as a solo artist, it was released on March 9, 2018, by Napalm Records. The album is a musical departure from the hard rock music of Kennedy’s other projects, instead featuring a stripped-back blues-based sound. A concept album, it explores the death of Kennedy’s father in 1974, the year of the Tiger in the Chinese calendar.

Prequelle is the fourth studio album by Swedish rock band Ghost. It was released on June 1, 2018 and produced by Tom Dalgety. The album’s first single, “Rats“, was released ahead of the album on April 13, and as of July 28th, had peaked at number one for seven weeks on the Billboard Mainstream Rock Songs chart. The album marked the band’s strongest selling debut to date, landing at number 3 on the Billboard 200, selling 66,000 copies in its first week, with 61,000 of those being “traditional” album sales. #BestAlbums2018 #Bestof2018 #YearEndList

I am an album reviewer, band interviewer, concert photographer. At least once a week I review a new album in the rock genre the week it comes out (anything from alternative to metal). Check out my site at www.rockedreviews.net and my twitter feed @rockedreviews"
@http://www.twitter.com/rockedreviews
Previous MY LIFE WITH THE THRILL KILL KULT Announce Spring Dates for STRANGE AFFAIRS TOUR with CURSE MACKEY!
Next All From Nothing – Eyes To The Stars EP