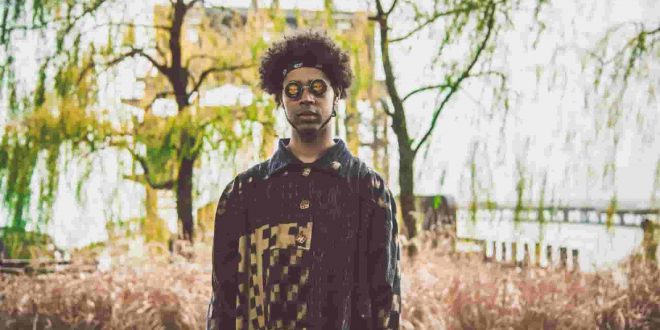 Katiah Lunn is a New York City rapper hailing from the Upper West Side. Debuting back in 2016 under the name Katia One with Mixkatape…The Hype, Lunn utilizes a uniquely classic sonic foundation of rock and soul, inspired by everyone from Freddie Mercury, to Isaac Brock, to Sam Cooke. Those sounds remain a standard up to his new EP, A Whole Lotta Water Works, (done in collaboration with Wally Sean) by which he strives to alter the ilk of typical modern hip hop – and wholly succeeds at doing so.

Of the songs in his current repertoire, the carrier single “Tail Spin” is what stuck out to me most. Its instrumentation is distinct, comprising a funky bass groove and shimmering chords that offset static percussion. Lunn’s delivery may register as calm and collected on the surface, but it flows with a subtle, sharp sense of awareness. His lyrical phrasing ties the color black with allusions to current political issues, and seems serious in tone. However, as the song progresses, Lunn’s sense of humor is made clear. One then provides further associations with more random black-based references, as well as an underlying insinuation that others expect such references to be part of his subject matter, possibly due to the mere color of his skin. To put this in perspective, all of these thoughts are expressed within a hardly one-and-a-half-minute length, making the song’s ultimate presentation especially impressive.

I come from a family who is passionate about all things music. I learned to sing at an early age, and by 13, had my very own Fender Strat guitar. I tried my hardest at learning all that I could. Because I was born with cerebral palsy, I had to teach myself an adaptive playing style. I learned to write and record my own music, despite these difficulties. In college, I started making great use of my writing abilities by reviewing music, as well as copy editing. I guess it's best to stick with what you know, while welcoming a fair challenge at the same time.
Previous Hemhora and the Glass Band Release EP
Next Gallery and Review: The Casualties at Gramercy Theatre New York City 11/28/18