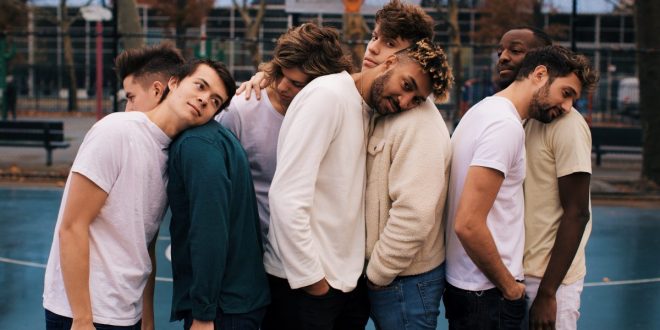 Boston-based, seven-piece band Juice recently released their new song “Audrey Tell Me,” which premiered on Earmilk. The song showcases the band’s versatile musicality, passionate vocals, and strong lyrical imagery that takes you along for a ride down the 405.

“Oftentimes, we want to tell a story – maybe even discover something about ourselves along the way. ‘Audrey’ does that by exploring an atmosphere – one that considers darkness, euphoria, charm and infatuation. To that end, it’s cathartic to define a character who is afflicted in some way. We had a lot of fun making it, try it in your car,” says Michael Ricciardulli, the band’s guitarist.

After meeting as freshmen at Boston College, Juice became unified upon winning their school’s “Battle of the Bands” in 2014. Through constant gigging the band honed their live performance, displaying an original raw energy. Soon, they went from frequent gigs at the city’s famed Middle East to selling out East Coast hotspots such as Brighton Music Hall, Mercury Lounge, Rockwood Music Hall, and more. Hitting Summerfest Milwaukee in 2016, Juice impressively won the grand prize of the festival’s “Land The Big Gig” Competition and opened for pop juggernaut DNCE at the festival a year later, where they met Grammy-nominated producer Johnny K, who worked with them on Workin’ on Lovin.’