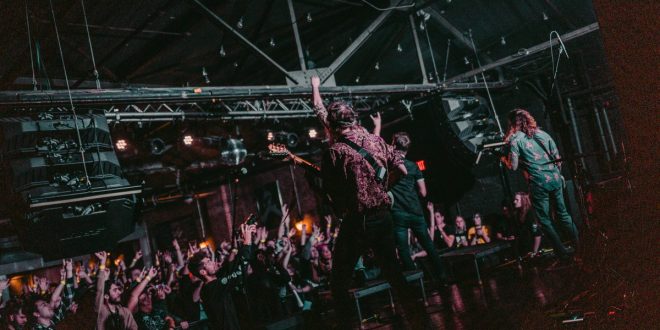 Fresh off a newly released fourth studio album, -Anon. Hands Like Houses brought their U.S. Tour 2018 to the Brighton Music Hall as one of Boston’s best Black Friday deals this year along with Emarosa, Devour the Day, The Faim, and Arlington.

Although they opened up their set with “New Romantics” and “Colourblind“, which are songs off their last record Dissonants, they didn’t wait too long to grace Boston’s ears with songs off their new album by playing “Monster” followed by “Tilt.”

The crowd sporadically breaks into random “Red Sox” chants in the silence between songs. Those were followed up by “Perspectives,” to which the band told the crowd to “Bang your f***ing heads!”

“One of the cool things about music whether it’s ours or any other piece of music on this planet is that it has this ability to speak to us on some sub-human sub-conscious level. It’s always [awesome] when someone appreciates it. We’ve spent a lot of time on our music over the years… but one of the crazy things about being a writer is seeing the way something you create something you write the way it leaves these speakers it suddenly takes on an entirely new meaning depending on whoever’s listening to it.”

Through the mixture of old songs and new ones the crowd was energetic and jumping around. They were excited to have Hands Like Houses back stateside and you could tell Hands Like Houses was happy to be back in Boston. They did mention that they will be back sometime next year, so keep your eyes peeled for that tour announcement because I know I’m excited for them to be back soon.

Caitlin Dunn is a Massachusetts based photographer who loves photographing concerts as well as events and lots of other things!
@@caitlindphoto
Previous Gallery: Bastille at The Pageant in St. Louis, MO on 11.29.18
Next Live Review + Gallery: Smashing Pumpkins at Aragon Ballroom – 11/30/18 Chicago, IL.