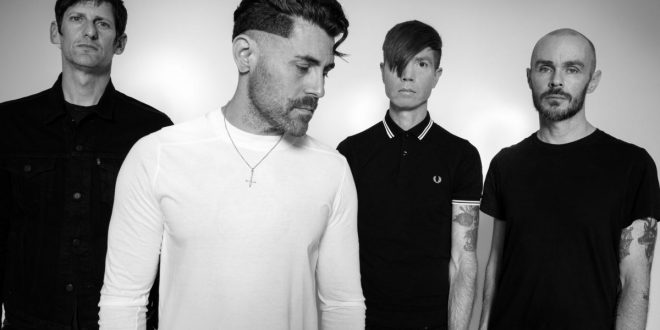 It’s no secret that one of my absolute favorite bands is AFI. Having said that, of course I absolutely jumped at the opportunity to review their new EP The Missing Man set to release on December 7th. The California-based quartet have been making waves in the rock music scene since 1991. The final lineup was cemented by 1998 with front man Davey Havok, drummer Adam Carson, bassist Hunter Burgan, and guitarist Jade Puget. AFI is always pushing boundaries and never conforms to cookie-cutter expectations and this EP demonstrates just that. Their upcoming release features five tracks in which the group experiments and showcases different approaches to their ever-evolving sound.

The upcoming single and opening track is Trash Bat, a fast-paced rhythmic number that reminds you to “keep it clean for the camera”. What exactly is a trash bat? I don’t know for sure but it might have broken teeth, empty eyes, with Havok wearing a halo at the same time. I love this visual just as much as I love this song. You can feel the fun that Burgan and Carson have performing, the drums and bass are intense and entertaining. This absolutely has to become part of the setlist for any upcoming shows.

Break Angels is my favorite song from the EP. The contrast between Carson’s drumming and Puget’s melodic guitar is dynamic and brings the track to a higher level of musicianship. There is a sense of urgency and melancholy in Havok’s voice that translates through the instrumentals and it is all tied together eloquently.

Back Into The Sun is a slow-paced time capsule of a song. From beginning to end I felt a sense of familiarity with it that I couldn’t quite pin down. Havok has a pained delivery that pulls at the heartstrings, further intensified by Puget’s melodic guitar riffs and the emphasized bass notes from Burgan. All in all a beautiful song.

The track that got the entire Despair Faction buzzing for days on end was single Get Dark. In it we get to hear what keeps AFI fans coming back for more year after year. Fun drum sequences, deep bass notes, glorious guitar solos, energetic and playful vocals. Get Dark is a great sing-along that leaves you wanting more.

Finalizing the EP is title track The Missing Man, admittedly one of the most intriguing numbers I’ve heard from the band. They have perfectly blended acoustic and electric guitars, classical instruments, drums and the faint backup vocals switching in pitch make this one of their most unique sounding songs. However different and unique it may be from what AFI fans know, it is still undoubtedly a beautiful song that is very much everything I’d expect them to do.

To learn more about AFI make sure to follow the links below:

Concert lover, music fanatic. If it sounds good to me, the rest doesn't matter.
@njaziaddict
Previous World Premiere Video From Top 5 iTunes Rock Band And Award-winning Director/Producer
Next Regretting The Past: Theory Of A Deadman – Scars & Souvenirs