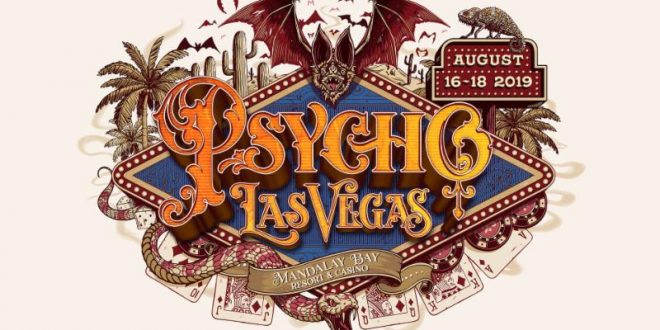 America’s rock ‘n’ roll bacchanal returns as PSYCHO LAS VEGAS brings its annual debauchery and unbridled volume to the Strip itself, with a move to the Mandalay Bay Resort and Casino that sets the stage for a Las Vegas Boulevard takeover, the likes of which have never been seen.

Slated to take place August 16th through August 18th, PSYCHO LAS VEGAS 2019 will feature four stages, including the newly renovated Events Center, the iconic House Of Blues, the Mandalay Bay Beach, featuring a wave pool and lazy river, and an old-school Vegas-style Lounge smack dab in the middle of the casino floor. While all of the venues are located on the property, Mandalay Bay is connected by a complimentary tram service that provides easy access to affordable accommodations such as Luxor and Excalibur. Attendees will have access to discounted rates at all of these properties and other MGM hotels and resorts down the Strip.

PSYCHO LAS VEGAS is unmatched in its level of presentation and 2019 promises not only a bigger and better festival but the experience of a lifetime. Anything goes. All bets — aside from the actual ones in the casino — are off. And if you think you knew what to expect, you’ve obviously never made the trip. Heralded as the vacation destination for those who worship all that is rock ‘n’ roll, PSYCHO LAS VEGAS’ move to Mandalay Bay is a monumental milestone in the growth of the event. The resort is one of the crown jewels of MGM Resorts International and is home to over 3,000 affordable rooms, nine bars and lounges, and 24 restaurants. Occupying 120 lush acres of land on the Strip, the world-class property defines grandeur in every sense of the word while still providing a sense of seclusion that is necessary for the PSYCHO-takeover that fans have come to expect. Make no qualms about it, PSYCHO LAS VEGAS 2019 will usher in a new era of spectacle, performance, and production.