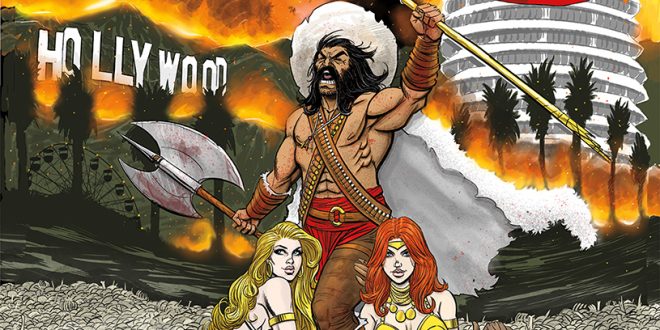 Good ol’ fashioned rock n’ roll finds a new home with a modern twist in LA rockers’ debut EP, Set It On Fire. One look at the over-the-top, in-your-face cover art and it’s not hard to believe VIKINGO!’s first EP hits home in its expression of the absurd discourse on current social and political climate.

Two Colombians, a Norwegian, and an American band together to package their collective annoyance of issues like environmental policies, immigration, equality and more in their new hard-hitting EP. Referencing personal struggles and past experiences, Set It On Fire aims to incite rebellion against the shallow and ludicrous. “The Set It On Fire EP means a lot to us because it’s our friendship in rock n’ roll form,” said VIKINGO!, according to the press release. “We’ve all been in the music business for a while and rock n’ roll has always been the link that’s connected us. We produced, recorded and mixed it ourselves with the intention of making something that would be truly rock n’ roll. That is, we wanted to make something truly rebellious and not canned.”

This three-song explosion of rebellion exudes anarchy and irony in a perfect combination. Beginning with its title track, “Set It On Fire” pokes the materialistic, shallow bear and sets it on fire rather than coping – a fabulous reflection of society’s current state of affairs battling with extreme black-and-white vision. “One Man Town” follows closely behind, commenting on the stubborn, polarized environment America has found itself in. “Make Up Sex” rounds out the EP. According to the New Noise Magazine exclusive, song-by-song release, this track is “a call to end nonsensical conflict. It’s a criticism on the hate that drives discrimination and the us-vs-them mentality. It’s also a middle finger to the people who capitalize on that hate to further their agendas, example: the current white house.”

Set It On Fire was recorded at the famed 4th Street Recording (Muse, The Beach Boys) and was mastered by Dale Becker, who has worked with acts like Neil Diamond. Considering all four members of VIKINGO! are producers, it comes as no surprise that they produced the EP as a group effort. Jeff Henderson, accomplished storyboard artist with credits such as Inception and After Earth, designed the notable Set It On Fire cover art.