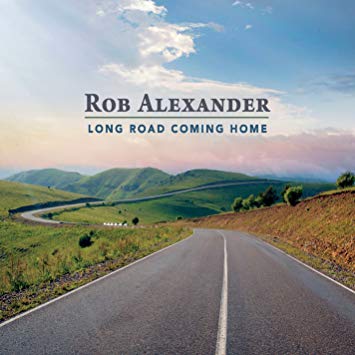 Rob Alexander fixes people for a living, and I’m not just talking about his successful medical practice. Alexander’s burgeoning music career, which has provided critics and fans with the brilliant album Long Road Coming Home and four additional singles in the last year, has been making waves well beyond his home in southern Florida, and it’s almost solely because of his incredibly endearing voice. His latest release, the title track from his debut LP Long Road Coming Home, is perhaps his most biting and introspective yet, and though it’s crushing melodies might be a bit more indulgent than that of some pop singer/songwriters, his music is anything but selfish.

“Long Road Coming Home,” to me, personifies Rob Alexander’s duality as a songwriter perfectly. The music is a little stock, somewhat rigid in its execution, but the tone and mood of its melody is startlingly sharp. His lyrics are the real bread and butter of his work, and project a very clear picture of his emotions in this track. Some critics might say that his persona is a little fragmented, but I see it as being layered and enigmatic, unfolding before our very ears as we take in his sumptuous cocktail of tonality and expression.

The transition between the second stanza and the chorus is a pivotal moment in this single. Spellbinding us in the ebb and flow of its volume, the song rips us away from the stoic verses and takes us straight into the epicenter of Rob’s feelings, which pull us into a vortex of gorgeous notes that dissolve as quickly as they came to life. The most common flaws that I find in contemporary pop songs exist within the singer’s attempt to make a chorus explode into a kaleidoscopic display, but Rob Alexander doesn’t face this kind of strife in his singles – at least none of the four that he’s released so far.

Perhaps the most intriguing attribute that Rob brings with him to the table isn’t his showmanship nor his lyricism; it’s his craftsmanship as a musician, which is aided by that of producer Gabe Lopez in this single. Lopez is exactly the kind of creative partner that Rob needs right now; together they balance out some of the more abstract narratives in his songs, and make more straightforward tracks like this one feel like hits even before they enter the charts. Not enough can be said about the thinly applied layer of polish that Lopez provides here, which is tight enough to make the song consistent but relaxed enough to let Rob be himself.

It’s not his most swaggering single and I doubt it’s going to serve as his ultimate swansong, but Rob Alexander’s “Long Road Coming Home” is a surreal glimpse at what he can accomplish when he has all the right tools in front of him. With a tad more definition in the instrumental portions of his music I think he’d be able to take on all sorts of venues, both open air spots and smoke-filled club alike, with the same confidence that he has in the studio. He’s onto something good here, and I look forward to seeing what he does with it.