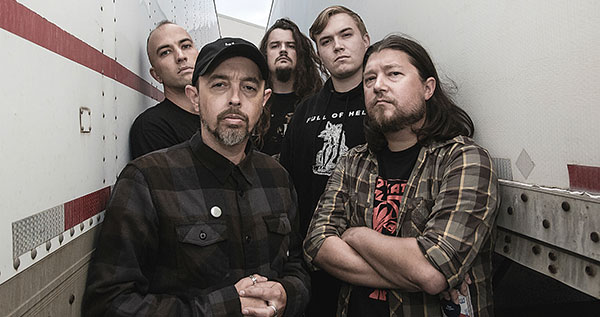 Pyralis formed in the latter half of 2016, comprising members of acclaimed hardcore and metal acts Disembodied, Torch the Spires, and Too Pure to Die. The Minneapolis, Minnesota quintet recently signed with indie label Good Fight Music and released a music video for “Daggers”, the band’s premier single. The single alludes to their forthcoming EP, Everything Is Emptiness. From the video’s initial debut on Metal Injection on the first of the month, it was subsequently uploaded to Good Fight Music’s YouTube channel on Friday, and has since accumulated steady viewership.

The band’s front man Aaron Weseman highlighted the video’s process, as well as the reasoning for making “Daggers” the first taste of what’s on offer.

“We recorded the video in the basement of the house that I’m living in this past August,” says Weseman. “My roommate went to film school, so we figured we’d put his talent to use. Based on our limited resources, the video far exceeded our expectations.”

Weseman then expands on what the concept represents from both a visual and thematic standpoint.

“The video is the fire and blood you experience going through a breakup with someone you love. I feel like it’s a theme that everyone can relate to. We picked this song because it is the first song we wrote, and I feel like it captured the raw intensity of this band.”

Look out for Everything Is Emptiness, to be released on November 30. Pre-orders are available through www.goodfightmusic.com

I come from a family who is passionate about all things music. I learned to sing at an early age, and by 13, had my very own Fender Strat guitar. I tried my hardest at learning all that I could. Because I was born with cerebral palsy, I had to teach myself an adaptive playing style. I learned to write and record my own music, despite these difficulties. In college, I started making great use of my writing abilities by reviewing music, as well as copy editing. I guess it's best to stick with what you know, while welcoming a fair challenge at the same time.
Previous Top 20 iTunes Chart Artist Premieres New Remembrance Day/Veterans Day Lyric Video; Performs On Daytime Live Ottawa
Next Album Review: Nita Strauss – Controlled Chaos