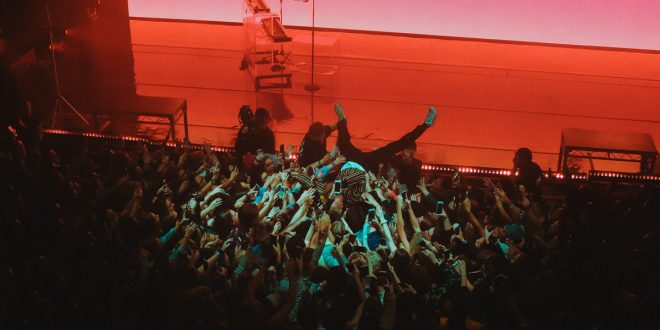 On Thursday, November 2, 2,500 fans gathered at the Riviera Theatre in Chicago for LANY’s sold out show. The band’s setup for this tour includes a LCD screen that spans nearly the entire length and height of the stage, with a break about 3/4th of the way up where Jake Goss, Les Priest, and a touring member are perched for the entire set. The screen has visuals for each song of the set, including a VHS-inspired visual with a countdown to the beginning of the show. As the clock ticked down to zero and Goss, Priest, and Paul Klein took the stage, deafening screams filled the venue. The band jumped right in to Thick and Thin, the first track off of their latest album, Malibu Nights.

The night continued in a similar fashion, with fans showing just as much energy and excitement for the newest songs as they did for the old songs. At one point, Klein introduced a new song, Taking Me Back, and asked fans to sing along to the words on the LCD screen. Within the first few lines, It was abundantly clear that the fans didn’t need the words projected- they had come prepared with each new song memorized.

The energy seemed to never plateau, even when Klein performed solo at the piano- the audience continued to sing the words with all of their might, and the band fed off of this energy. The show was a constantly bouncing back and forth, building and building until the encore. The band began their encore with Thru These Tears, the first single off of Malibu Nights, and ended with ILYSB. Klein remarked, “Chicago, we never expected this- thank you so much.”

Malibu Nights is available to stream on all platforms, and LANY tour dates can be found here.