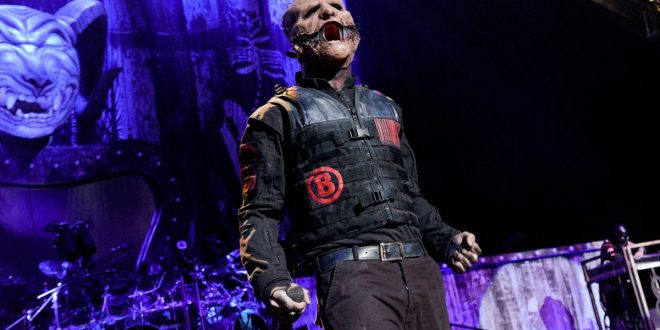 Slipknot are tired of hearing about “the next big thing” and they’re not afraid to say it. Yesterday, to celebrate Halloween, the Iowa based nu metal legends released a brand new single, called “All Out Life” and an accompanying music video.

Speaking to Zane Lowe on his Beats 1 radio show, Slipknot frontman Corey Taylor said: “Everybody talks about toxic masculinity and toxic fandom these days. For me, it’s more about this toxic idea that unless something came out 10 minutes ago, it’s not any good, and that bothers me. It’s like, I love new music, but at the same time, don’t turn your back on the music that’s been. Don’t turn your back on the people that worked to make a platform for you to have a platform in the first place, so for me, it’s really about … It’s a rallying cry for everyone. It’s about all of us getting together and saying, “You know what. Let’s not talk about old. Let’s not talk about new. Let’s talk about what is. Let’s talk about what’s good, what’s real, and get behind that and start embracing things that matter because there’s history there and not just because it’s the next best thing.”

In recent weeks rumors have swirled around Slipknot and their plans for 2019 which reportedly include a new album and world tour.

Previous The Japanese House debuts music video for “Lilo”
Next Album Review: In The Whale – Dopamine