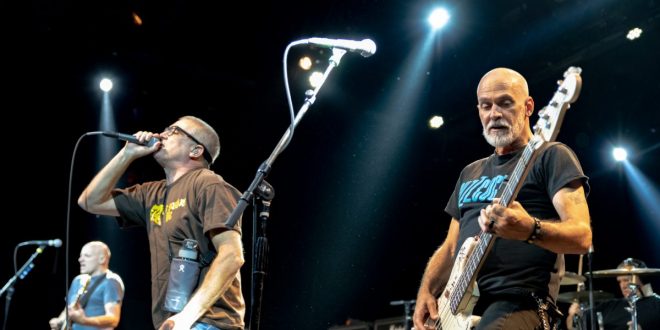 On Friday night a little known punk band from Hermosa called the Descendents invaded New York City’s PlayStation Theater in Times Square. With them they brought a 37 song set that well covered the bands 40 + years career.
Since 1986 the bands line up has consisted of singer Milo Aukerman, guitarist Stephen Egerton, bassist Karl Alvarez, and drummer Bill Stevenson.
With the band taking the stage in front of a near sold out crowd that instantly erupted as frontman Milo Aukerman went into the introduction of one of bands heavy fan fav “Suburban Home”, with the song underway fans wasted no time igniting a frenzy in the pit with the bodies of surfers being thrown over the barricades. It’s hard to say with a career of over 40 years what song is more popular then the next after “Everything Sux” it was right onto what I am going to say is by far the bands most well know song “Hope”. From there the band continued to slam out song after song as deafening cheers from fans constantly erupting through the theater.
It wasn’t until the band got to the 14 song “where things went insane as Dez Cadena stepped out on stage to join them on vocals for “Van” but that wouldn’t be all for the surprises.
After the band ran through 29 songs of the set in an hour and left the stage most fans figured that the show had ended and began to pour out into the theaters hallways making their way to restrooms coatcheck line and some even leaving all together, that wasn’t it though! After a bit of silence and the house lights still remaining off the band made their back out on stage for the first of two four song encores beginning with “Merican” and ending “Smile” in the first. The band would begin the second encore with “Good Good Things” and end it with something even better as they were once again joined by a special guest Dez Cadena on vocals for the cover of Black Flag’s “Jealous Again” along with a little change up with Bill Stevenson on guitar and Stephen Egerton on drums which was by far amazing to watch.

Setlist:
Suburban Home
Everything Sux
Hope
On Paper
I Wanna Be A Bear
Rotting Out
Victim Of Me
Get The Time
I Like Food
Shameless Halo
My Dad Sucks
Clean Sheets
Testotirone
Van
Feel This
Nothing With You
I’m Not A Punk
Silly Girl
I Don’t Want To Grow Up
Who Are We
Weinerschnitzel
Myage
Without Love
Global Probing
Coffee Mug
When I Get Old
Coolidge
Thank You
Descendents
Encore:
Merican
I’m The One
Bikeage
Smile
Encore 2:
Good Good Things
Hey Hey
Spineless And Scarlet Red
Jealous Again (Black Flag cover)

NewYork Based Photographer. Music Enthusiast with a background in Graphic Design. Whether I'm shooting a live event or just out wondering the streets its about capturing the moment.
Previous Patiently Awaiting the Meteorite – Strange Intuition
Next Jim Clements release new record