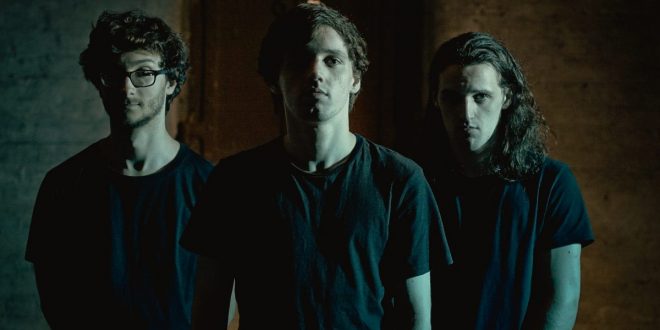 Blank Atlas is a three-piece band from Bristol, UK consisting of twin brothers Tom (drums, vocals) and Dan Thould (guitar, vocals), and Chris Simpson (bass, vocals). Their debut EP ‘Solitude’ came out in 2016 and was recorded by Neil Kennedy (Creeper, Milk Teeth, Press to MECO.) Since then the band have devoted their time to touring and have shared stages with the likes of Dream State, Allusondrugs and Fatherson. Blank Atlas’ new EP “Canvas” sees them heading in a heavier musical direction, combining big choruses and lush harmonies with angular, chuggy riffs. For a taste of their sound, check out the music video for their song “Sing for Something” from the Canvas EP.

We sent our introductory questionnaire over to Tom Thould from the band and asked him to tell us a little more about Blank Atlas, here’s what he had to say:

Tom: I’d describe our sound as heavy music with angular riffs with almost poppy, catchy choruses. We like to think there’s something for everyone 😊

How did Blank Atlas first come together? Is the band still all original members?

T: We formed years ago back in Wales while we were in school under a different name. We then all moved to Bristol 4 years ago to go to uni and still be able to pursue the band. It’s safe to say we’ve changed a lot since then, we’ve definitely found our feet in regards to the sound we’re going for – we’ve had a long time to figure it out! But after 7 years, it’s the same line up as it was when we first started!

T: We’ve lots of exciting moments in the band – our headline shows always stand out to us as highlights. Our most recent headline shows when our EP was released was particularly good! Having the opportunity to play with bands we look up to is also something we’re proud of!

What does it take for a band to stand out in a music environment such as Bristol?

T: Bristol is such an open minded city, I think anything goes! Just make sure you’re passionate about what you do and you’re good at it. We’re very lucky to be in such a open minded and friendly city, it’s nice to feel like you’re a part of a little community.

What should people expect from your live performance when coming to see Blank Atlas?

T: We’re constantly planning to do bigger and better things! Play more shows, with more bands, in more cities, potentially countries! We’re also sitting on a load of songs, so we’re gonna concentrate on getting them recorded over the next few months or so.

T: Dan and Chris are definitely the primary songwriters in the band. What’s been really great about our most recent EP is that they’ve been collaborating together. Whereas, on our last release, they very much worked separately. So it’s been nice to see us working together on songs for this release, and I think the songs have turned out better in the process too!

What should people expect from the band for the rest of 2018?

T: We still have a fair few sick shows coming up, dotted about the UK. Head over to our website to see if we’re playing near you! Particularly excited for our next show at the end of the month at Acid Hat’s Weird and Wonderful Fest. Playing some sick bands – Poly Math, Body Hound, Wot Gorilla. Too good.

T: I’m not too sure, I feel like it was either Red Hot Chilli Peppers, McFly or Hannah Montana. All great albums, nonetheless.

The first concert you attended?

T: It was McFly in 2006, was very good too! They were an important band for me and my brother growing up, definitely a big influence on us and motivated us to start playing in bands.

T: Press to MECO has always been a big influence on us, which people always call us out on after every show too! Also bands like Arcane Roots and Biffy Clyro were important to us when we were finding our feet as a band. Enter Shikari were an important one too, definitely a collective favourite of the band since we’ve started. They’re DIY attitude has particularly influenced us.

Catch Blank Atlas live at any of the following dates: