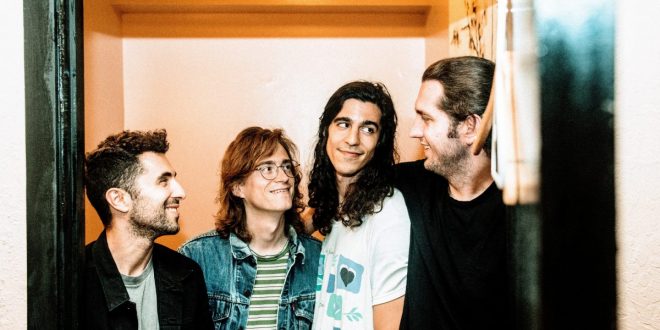 Indie pop band from LA, Sure Sure has released the playful new video for their lush and charming new single “Lie Lie Lie” today. A bright track about a bad habit, the track was recently featured as KCRW “Today’s Top Tune” and is already being played on KCRW Morning Becomes Eclectic and Sirius XM Alt Nation’s Advanced Placement Show. The “Lie Lie Lie” video debuted with New Noise Magazine today.

After a sold-out tour with Hippo Campus earlier this year and a packed follow-up headline run, the band will be back on the road again this fall, joined by Wilderado with stops in Brooklyn, Los Angeles, Boston, Chicago and more. Full tour dates below and here.

The highly collaborative group, composed of Chris Beachy (keyboardist, singer), Charlie Glick (guitarist, singer), Kevin Farzad (drums, percussion) and Michael Coleman (producer, bass, keys), has been releasing independently and systematically over the past couple years. Perched on a hill in Highland Park, the boys self-produce all their music in their house-turned-studio. Sure Sure’s recordings and infectious live show have quickly solidified them as one of the most exciting up and coming bands out of LA. Their sound is characterized by a glowing warmth, earworm melodies, and driving rhythms, like if the Talking Heads, Tame Impala and Steely Dan raised their love child together under the California sun.

Ever since their 2016 single “New Biome” caught fire on Spotify, the band now has over 14 million total Spotify plays and has been garnering a rapidly expanding audience, both online and in real life. In the summer of 2017 they began a new release cycle, putting out the heartbreak-pop tune “Friends,” dance-tastic “Hands Up Head Down” and others, reaching #1 on the Hype Machine charts and gaining praise from Grizzly Bear, Rostam of Vampire Weekend and other staples in the indie music community. Following their album release in January and national television debut, performing on the ESPYs Red Carpet on ESPN, the band is touring nationwide again this fall on top of two new singles. You can call the boys at (323) 739-0630 if you have any questions, comments, or just want to say hi.