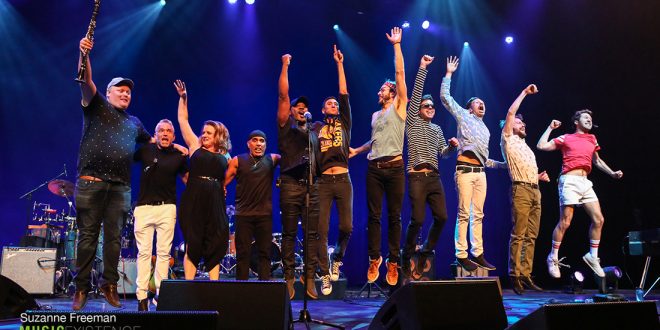 Vulfpeck played to a sold out crowd at King’s Theater in Brooklyn, NY on Saturday night. If you have never attended a live Vulpeck show before, the best way I could describe it would be to say it’s synchronized musician roulette. The core band, comprised of Jack Stratton, Theo Katzman, Woody Goss, and Joe Dart are multi-instrumentalists. With the exception of Dart, who plays only bass, the other members of the band switch instruments frequently during the show. In addition, they are usually joined by guitarist, Cory Wong, and singer, Antwaun Stanley. On this particular night in front of over 3,000 people at the historic King’s Theater, they also had a host of special guest appearances.  Among them were Michael Winograd (clarinet) Joey Dosik (piano, sax, and vocals) Melissa Gardiner (jazz trombone) and Mark Dover (clarinet).

Seeing an artist get the chance to play live with one of their idols is not something often witnessed and is always a treat for those in attendence. Dave Koz, the Grammy nominated best-selling “Sultan of Smooth” saxophonist took the stage to play “Smile Meditation” with the band. Wong, who is a huge fan of Koz, couldn’t contain his excitement and the energy of the crowd amplified as he jumped around on stage.

To “bring the vibe down” a bit, Stratton brought his mom on stage to lead the audience in meditation and some tapping therapy. It’s truly a sight to see an entire theater take a meditation break in the middle of a show.

Another memorable moment was when Louis Cato, a drummer known for being a part of the band on “The Late Show with Stephen Colbert,” sat in on “Beastly” with Dart. Katzman has been a longtime fan of Cato and was visibly excited, which got the energy in the room cranked up again.

The show wrapped up with Koz coming out again and playing “Outro” with the full band, a curtain call and a group leap in the air. This was the second show they played in Brooklyn before they head to Europe for the remainder of their tour. The Brooklyn fall kickoff of the tour has been a 4-year tradition and fans of the band hope it continues for years to come.

Their newest album, Hill Climber, is due out December 7.

You can find their other albums here.

Find them on tour here.

Fun Loving Music Photographer and lover of live music in general. I am most likely to be spotted with a coffee in one hand and a camera in the other, somewhere in Philadelphia, New York City and everywhere in between. For more of my music photos: http://myphotos.bellemorephotography.com/
@bellemorephoto
Previous Gallery: Against the Current at the O2 Ritz Manchester 24.09.2018
Next Indie Artist’s Remixed Single Charts Alongside Jason Derulo