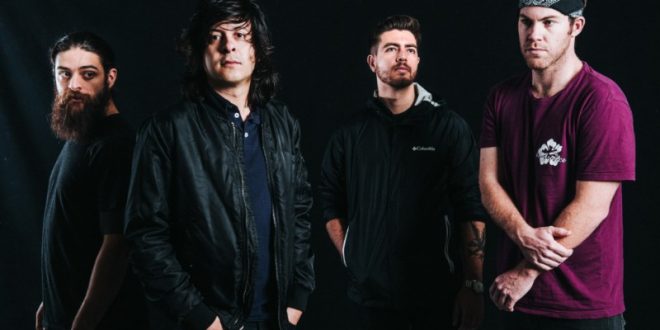 One week ahead of their highly-anticipated new full length, Mental Knife, Hail The Sun have released a scorching new single “Glass: Half Empty” alongside an official video for the track. ”Glass: Half Empty” provides some of the most maniacal moments we’ll see on Mental Knife – alternating between moments of visceral screams and mind-blowing guitars and ethereal finger-picking over which singer/drummer, Donovan Melero, shows his command of melody. The vibrant colors and cheerfulness of the video provide a striking contrast to the message and overall tones of “Glass: Half Empty” as a song.

Donovan adds this regarding the single/video: “’I’m very grateful for everything I’ve ever been given or earned. I count my blessings on a daily basis. However, I feel as though the obsession to always want ‘more’ has always plagued me. The harder it is to get…the more out of reach it seems… the more I want it. And if and when that is achieved, it’s like my mind solely decides that it’s time to crave something else. Or even worse, I realize I no longer want it, and never did.”

“Glass: Half Empty” comes just ahead of Mental Knife, which is out September 28th on Equal Vision Records and can be pre-ordered today. Sonically, Mental Knife is the closest the band has come to realizing the sound they’ve sought since forming in 2009. The band lived largely in the same creative space for this record as they did on its predecessors – Culture Scars (2016, Equal Vision Records) and the Secret Wars EP (2017, Equal Vision Records). However, all four members of the band have elevated their already impressive style of play on Mental Knife; pushing the limit of what is capable when walking the delicate line between intricate song arrangements and massive riffs and thundering rhythms. To realize their vision for Mental Knife, the band worked with Beau Burchell, best known for his role as a member of Saosin and producing that project’s iconic Translating The Name full length which was a major influence on the members of Hail The Sun.

Since finding sobriety nine years ago, Donovan Melero, the vocalist and drummer for Hail The Sun, has found himself constantly consumed with the idea of making the most of every day. Melero – along with bandmates Aric Garcia (guitar), John Stirrat (bass) and Shane Gann (guitar) – manage both the creative and business sides of Hail The Sun as they continue to grow into one of the most revered acts in their genre. Melero has also developed into one of the most respected booking agents in rock due to his incomparable work ethic. Somehow he even manages to find time to advance his side project, the progressive rock supergroup Sianvar, which has developed a sizeable cult following of its own. On Mental Knife, Melero tackles that constant need for self improvement and his obsession with making up for lost time in a way that is both unabashedly honest and artistically innovative. The title of the record stems from the idea of cutting out those aspects of your life that don’t contribute to a more fulfilling existence. The subject matter largely centers on trying to develop a genuine confidence that allows you to acknowledge your own imperfections and provides the strength necessary to work towards correcting them.

Hail The Sun will join Polyphia on a full North American tour this Fall to support Mental Knife. All dates are listed below and tickets can be purchased from hailthesun.com.