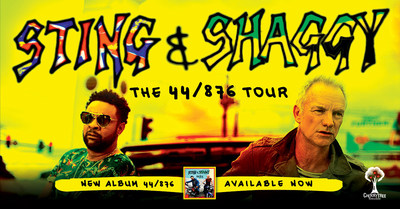 Following their critically-acclaimed European tour, STING and SHAGGY will kick off The 44/876 Tour in North America on September 14 in Jacksonville, Florida before making stops in major cities across the continent (full tour itinerary below), as announced by the Cherrytree Music Company and Live Nation.

Hailed “one of the most anticipated concerts of the year” and “a two-hour musical melting pot,” the dynamic and vibrant joint live show finds the two GRAMMY-award winning artists combining their bands to perform songs from their island-flavored album, 44/876 (A&M/Cherrytree/Interscope Records) which has spent twelve weeks atop Billboard’s Reggae album chart, and collaborating on each other’s most celebrated hits such as “Every Breath You Take,” “Englishman In New York,” “Message In A Bottle,” “It Wasn’t Me,” “Mr. Boombastic” and “Angel.”

While many of the concerts have already sold out, tickets for select cities are still available at www.ticketmaster.com and usual outlets. Every online ticket purchase includes one physical or digital copy of Sting & Shaggy’s album, 44/876.

Stay tuned to www.sting.com for special events popping up along the tour, including an in-store signing and Q&A at the Electric Fetus in Minneapolis, MN before Sting & Shaggy’s show at The Armory on September 30. For access to this private event, please visit https://www.electricfetus.com/ for details.

The tour is produced by RZO Entertainment and promoted by Live Nation Global Touring.