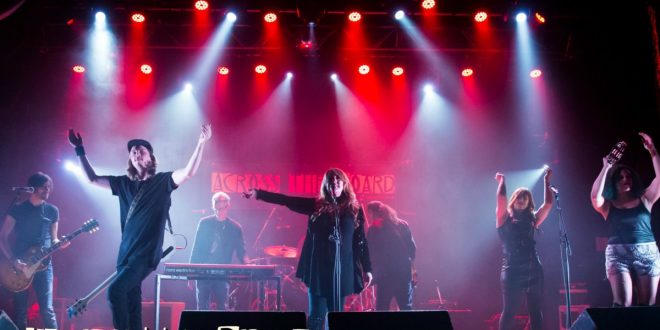 The Toronto-based rock band reached #4 on the iTunes Canada Rock Songs chart with the title track from their latest album, “Sonic Boom.”

Wow! Amazing! What is going on?!?! I can’t believe this is happening!”

On the heels of the premiere of their official music video for “Sonic Boom,” Toronto-based rock band, Across The Board have reached the Top 5 on the Canadian iTunes charts. The title track from their latest album reached #4 on the iTunes Rock Songs chart, in their home country. The band came in ahead of legendary artists Paul McCartney, Queen, AC/DC, and Toto.

“Wow! Amazing! What is going on?!?!” said Jackie Auguste, lead vocalist for the band. “I can’t believe this is happening!” She described the song, “Sonic Boom:” “We wrote the title track as that moment in a young person’s life when they throw caution to the wind, and set out on their pie in the sky musical journey—no holds barred, full speed ahead, with all the dedication, determination and drive of a wide-eyed kid.”

Across The Board are a band of multi-instrumentalist musicians with over 500 Youtube videos, three original albums and a growing social media fanbase and live audience following. They seamlessly combine creative talents to push their pop-rock sounds to the edge of the rock ‘n roll envelope. With harmonious power vocals and catchy electric guitar riffs, Across The Board have been touring their new album “Sonic Boom” around Ontario, Canada. They are soon to launch their second coast to coast tour in December of 2018, traveling across the country from Toronto to Vancouver and back by rail. Then, an East coast of Canada as 2019 unfolds for the Toronto-based group.

A 3-song “Live In Studio” EP is being released, with accompanying videos being launched weekly on MusicExistence.com, beginning on Friday, September 21st.