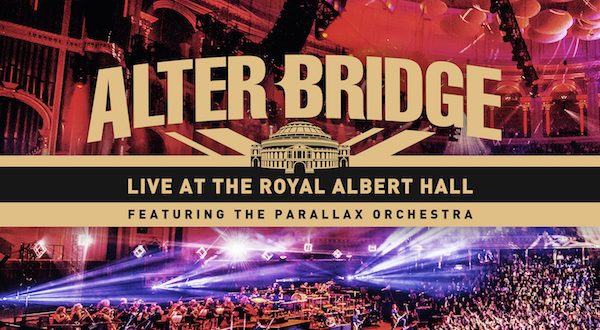 When the two Alter Bridge shows with the Parallax Orchestra at the amazingly beautiful Royal Albert Hall in London were announced, I could not have been more excited to go. Those two shows were surely a wonder as anyone who was there would surely tell you. And that was no easy task itself, it was to be expected after all that the shows will instantly sell out and sure they did. The band and orchestra got to play not only one, but two consecutive nights in front of a packed RAH and almost a year later, live recording of these concerts is being finally released.

The almost 3 hour long video was recorded over two nights, including lot of behind the scenes and interview footage. From the first side, you would not notice it is not just one show, but two mixed together and that just shows how well it was put together. At first, I was a bit sceptic about the interviews and behind the scenes being included in between the songs from the concerts, but they fit in so perfectly I did not mind it in the end one bit. It just adds to the story and you get to hear how the whole idea came up, get to see glimpses from the rehearsals and see how the whole show was prepared and realized. Many insights and thoughts about these show from the band, folks from the orchestra and the mastermind behind all this – the amazing Tim Tournier are being shared over the course of the whole recording and together it creates a nice story together.

The sound is quite amazing too, I am very happy with the mix to be honest. And believe me, I am pretty picky when it comes to live concert releases. You can hear the orchestra just fine, the instruments and singing are all well balanced and everything has its proper place and no part is faded or drowned in the others. The orchestra parts are on spot and they fit just right and they are taking the already amazing songs from Alter Bridge’s wide catalogue to another level. Simon Dobson did amazing job with the arrangements with the help of Will Harvey, Andrew Skeet and Nathan Klein and the whole Parallax Orchestra did an amazing job playing those parts. And Simon is definitely a rockstar and one very talented artist himself. The only thing I am a little less happy with is the sound of the crowd – in many songs you cannot hear people sing all that much, the first song where you can hear the crowd decently is “Ghost Of Days Gone By” and I can assure you, people were singing quite loud during the whole show from first second to the very last. People from all over the world flew to these two shows and that alone says something.

The performance itself is besides of outstanding music full of energy, funny moments and jokes and amazing highlights like that high note Myles dishes out in “Words Darker Than Their Wings” that is just out of this world. These two nights were also the first time ever the band played this song live. Marks vocals are very much enjoyable, too. I personally prefer his “Waters Rising” vocals much more here than in the O2 Arena live CD the band released last year. And generally just watching these four guys on stage is always such a pleasure, because you can see on them how much they enjoy the music, enjoy playing and performing, how humble they are despite the unmistakable talent and they always give their everything to the show and the fans. And the Parallax Orchestra was no different, it was so clear those guys enjoyed themselves during those two nights very much.

Another big highlight of the show is definitely performance of “Wonderful Life / Watch Over You” with Myles on the acoustic guitar backed up by the orchestra. Acoustic version of these two songs combined together is nothing new for the Alter Bridge fans, but this one was really special with the orchestra. Not to mention that the video was recorded, cut and put together in the most beautiful way. Pictures of Kennedy, orchestra, crowd, the beautiful venue blended together are quite a wonder for these two songs and it is easily one of the favourites of me visually. It’s hard not to get a little bit emotional watching this and remembering those two nights, along with “In Loving Memory” that was not played live for some time before these two shows. Watching Myles get down from the stage and up close and personal with the crowd during “Broken Wings” is quite a sight too, not to mention crowd singing every word with him once again.

The show ended with “Open Your Eyes” which is a little bit untraditional, since the band usually closes their set with “Rise Today”. It was magical watching at the end of the show, when the last song was played and everyone got on the stage to wave the crowd the last final goodbye how the crowd slowly but surely started sing the words from the song. “Yeah, oh yeah, I want to rise today and change this world,” echoed through the venue for a while. Just further proves what a loyal and amazing fanbase this band has and the amazing relationship between the band and the fans that is absolutely deserved. It almost feels like a family in a way and also while watching the video and seeing so many familiar places brings a smile to my face.

What is also remarkable is the fact that part of the profits from the show went to the Future Song Foundation, an organization Myles Kennedy is part of and that is helping children to get access to musical instruments and education that they are not able to afford in many many cases. A portion of the proceeds from all sales of the upcoming release will go to the foundation as well.

It is a big challenge and hard task for sure to capture such a show on a video. Even thought it will never be the actual show, this comes as close as it possibly could. The whole crew made an amazing job documenting these concerts so people who weren’t able to see the shows themselves will have a chance to see what it was like. And for those who got to experience these shows it will be a beautiful memory and a chance to relive the once in a lifetime experience of Alter Bridge joining forces with the Parallax Orchestra for two magical nights at the Royal Albert Hall over and over again.

Live At The Royal Albert Hall comes out this Friday, September 7 via Napalm Records.
The pre-order is currently live here: http://smarturl.it/LiveFromTRAH and at www.alterbridge.com.