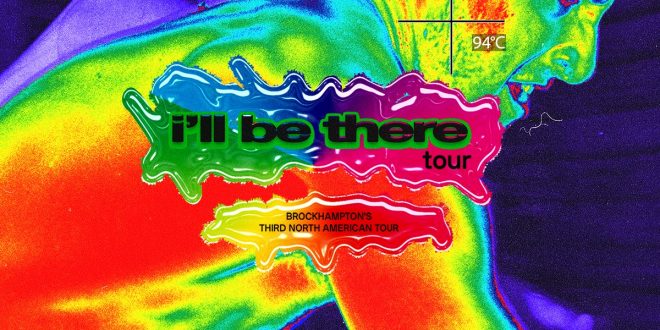 After wrapping up an expansive and widely-celebrated European tour, BROCKHAMPTON is returning home to announce their new North American fall tour. Beginning on October 3rd in Mesa, Arizona, the hardest working boyband in show business will play 27 dates across North America including festival sets at Austin City Limits and Tyler, The Creator’s Camp Flog Gnaw before concluding on December 6th in Las Vegas. Tickets for the newly announced North American dates will go on sale to the general public starting Saturday, September 8th at 10am local time at LiveNation.com.

In addition to the new tour announcement, BROCKHAMPTON also announced their new album Iridescence will be arriving in September. The new album arrives on the tail end of a wildly-successful tour run that saw BROCKHAMPTON play a string of 5-star reviewed, sold-out European tour dates including back-to-back London shows and two highlight sets at Reading and Leeds Festivals. In Reading, the group was brought on stage to close N.E.R.D’s set, with Pharrell shouting out his “little brothers” after a wild performance of “Lemon.” Now, after dominating conversations across Europe, BROCKHAMPTON is returning home with a new album and North American tour on the way. The group also recently announced a slew of sold-out dates in Australia and New Zealand, including performances at all four cities participating in Australia’s Listen Out Festival.

See below for full tour routing and stay tuned for more from BROCKHAMPTON coming soon.

Previous Album Review: Alkaline Trio – Is This Thing Cursed?
Next Next Post