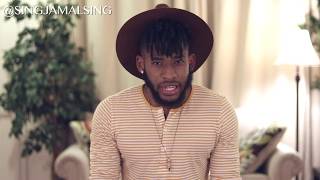 What do you get when you mix classical with blues, jazz with pop, and alternative with gospel? You get Jamal Moore. An artist who does not believe in musical boundaries. Since 2012, Jamal has toured nearly forty countries with his band The Exchange and released multiple albums. Their most recent project “Pursuit” has been nominated for several Contemporary Acappella Recording Awards including Best Pop/Rock Album, Best Pop/Rock Song, and Best Original Song. In 2014, they were featured as the opening band for the Backstreet Boys European “In A World Like This” tour and as competitors on NBC’s The Sing Off Season 5. Jamal grew up in Augusta, Georgia and discovered his love for music from his grandmother, father, and church at an early age. The influences of his dad’s funk drumming and the soul of his grandmother’s gospel moans birthed his unique musical style. Jamal sang in various ensembles around his hometown including Creative Impressions, a teenage performance ensemble that nurtured his hunger for multiple genres of music, Intonation, a trio who rose to local fame with their diverse musical concerts, and the Grammy Award-winning chorale of his alma mater Davidson Fine Arts High School. After high school, Jamal went on to graduate from the nation’s top ranked music school, Eastman School of Music, where he received numerous accolades and was featured in several Eastman Opera Theatre productions. His most notable award at Eastman was The William Warfield Scholarship. It is an award given to African-American students who excel musically, academically, and embody the kind spirit of the late great William Warfield. During his studies at Eastman, Jamal’s hunger for musical diversity led him to the University of Rochester’s premier all male a cappella group, The YellowJackets. The summer before his senior year he, his fellow Exchange bandmate Aaron Sperber, and the YellowJackets were chosen to compete on season three of NBC’s The Sing-Off. Jamal was featured as a soloist every week of the YJs stint on the show and was praised by the judges for his “interesting” voice and ability to mix genres. After graduation, Jamal was chosen by Damien Sneed as a featured soloist for the international premier of Wynton Marsalis’ The Abyssinian Mass at the Barbican Center in London. The musical work required the singers to use jazz, classical, and gospel techniques throughout and after hearing Jamal in rehearsal, Wynton acknowledged the old soul of his voice and allowed him to start the mass as the first soloist. Currently, Jamal is touring with The Exchange and working on his solo E.P. entitled Timeless which will showcase his unique sound and style. “Some of my main influences are Nat King Cole, John Legend, Bryn Terfel, Brian Stokes Mitchell, and Trey McLaughlin so when you mixed those together you get a really interesting style. I’m so excited to share the music of my heart with fans all across the world and allow them to understand my upbringing. I want my supporters to come to my concerts not knowing what to expect and when they leave have a newfound appreciation for other genres and music’s ability to save lives.” The project is set to be released in the fall of 2016.

Stephen Vicino is the founder of MusicExistence.com. He created this site to give talented musicians a voice and a way to be discovered.
@@svicino
Previous Canadian Melodic Rocker Cory M. Coons Performs On Daytime Ottawa
Next Ashley McBryde – Power & Light District – Kansas City, MO – 8/16/2018