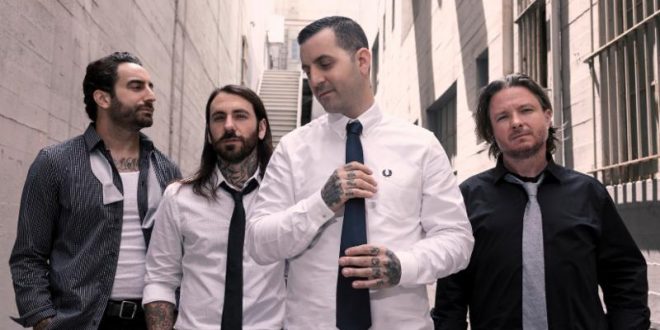 Bayside has announced that they will be releasing Acoustic Volume 2, a follow up to 2006’s Acoustic onSeptember 28th, 2018 via Hopeless Records. The record features one brand new track, “It Don’t Exist,” in addition to ten re-imagined versions of songs from across the band’s discography. Fans can check out the music video for “It Don’t Exist,” which stars actors Jonah Ray (Mystery Science Theater 3000) and Deanna Rooney (Hidden America), here: smarturl.it/ItDontExistVideo. To pre-order the album, please visit: smarturl.it/AcousticVolume2.

“This album is strictly for the fans, more so than any other release or record,” frontman Anthony Raneri shared. “We didn’t want to just play them as they were written on acoustic guitars, we put a lot of time into re-imagining them. We wanted to give new life to some of the songs fans love, including some that have never been played live.”

Bayside represent a lifestyle, a counterculture, and a deeply held conviction, diverse in thought and background but united by a shared desire for authentic expression. It’s a spirit that permeates an impressive and storied discography, including Sirens and Condolences (2004), Bayside (2005), The Walking Wounded (2007, celebrated with a 10 Year Anniversary tour in 2017),Shudder (2008), Killing Time (2011), Cult (one of Kerrang!’s Top Albums of 2014), and Vacancy (2016).

With a spirit of deconstruction and re-imagination, Bayside returns refreshed and reinvigorated with Acoustic Volume 2. A blend of instantly recognizable fan-favorites and deep cuts, Bayside’s latest release throws off convention in search of the distilled melodic essence and emotive power of their catalog. These aren’t “stripped down” versions of Bayside songs so much as they are completely new discoveries, refashioned and broadened by possibility.

Unburdened by any expectations or preconceived notions, the band made the record quietly and at their own pace, steadily mining their past to build a new vision for the future. Musicianship and artistry is paramount, with a purposeful urgency throughout.

Acoustic Volume 2 was crafted in Franklin, Tennessee with Jon Howard, a musician and producer who has worked with Paramore, Dashboard Confessional, and New Found Glory. Howard is part of a hyper local community outside of Nashville that includes members of those bands, as well as Yellowcard, Saves The Day, Grammy winning producer Nick Raskulinecz, and Raneri, among others.

It was liberating for Raneri and longtime members Jack O’Shea (lead guitar), Nick Ghanbarian (bass), and Chris Guglielmo(drums) to tear down the walls, playing the songs any way they wanted, as though they had just been written for the first time.

In every note of the vibrant Acoustic Volume 2, a record that conjures the spirit of classic performances like Nirvana’s MTV Unplugged or The Cure’s most adventurous outings, Bayside serves up a confident reminder of their firmly established place in the rock music landscape. It’s evident – from all of the lyrics tattooed on fans, the cover version and tributes that permeate YouTube, and the obsessive supporters worldwide – why Bayside continues to thrive on the strength of these very songs.

Bayside will release Acoustic Volume 2 on September 28th, 2018. It is now available for pre-order at: smarturl.it/AcousticVolume2.