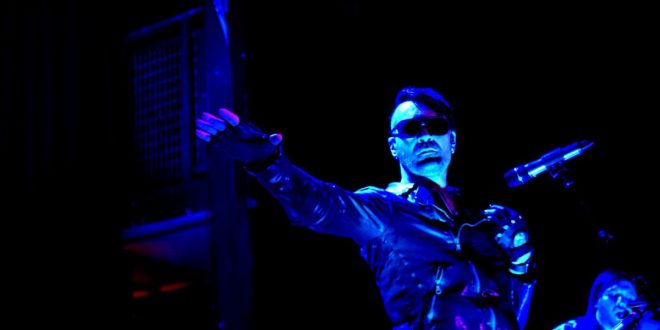 Show Review and Gallery: Julien-K at Rough Trade in Brooklyn on July 26, 2018

New York was treated to a stellar performance by California’s indie-tronic electro-rock outfit Julien-K during the California Noir Summer 2018 tour in Brooklyn’s Rough Trade. Readying the crowd for an unforgettable indie rock party were Texas native’s Nite, fronted by brothers Kyle and Myles Mendes. Their synth-infused guitars and melodic vocals were entirely captivating. Following Nite were Cali’s own, The New Division. This band set the tone for the rest of the show with their catchy tunes and passionate performance. Good times were rolling and the night was young, or so I thought.

Right before it was time for Julien-K to perform, I realized it was getting closer to midnight. If anyone is familiar with New York and all the bureaucracy that comes with street parking, panic was setting in and I and other audience members, found ourselves dangerously close to the mercy of those ridiculous parking regulations. It was concerning. Concerns which instantly dissolved the moment Julien-K got on stage and the music started pounding.

Frontman Ryan Shuck is an absolute showman and for the entire show he was dancing and grooving, enticing everyone to follow along. Also on vocals was Caitlyn Youngblood, Shuck’s long time music partner Amir Derakh on guitar and vocals, Alex Gonzales on drums, and Bidi Cobra was on keys and bass. The quintet was on point  and everyone had a blast.

Watching this band perform was a complete joy. The setlist was impressive (still on heavy rotation) and made me reminisce about California. I don’t know what it is about that state, but brilliant musicians come out of there and thankfully bring their music towards me. Some of their standout songs were “Kick The Bass”, “California Noir”, “Photo Voltaire”, “Mannequin Eyes”, and all time favorite “Blue Monday”.

To learn more about Julien-K make sure to check them out at the links below:

Concert lover, music fanatic. If it sounds good to me, the rest doesn't matter.
@njaziaddict
Previous Album Review: Randy Forte – “Chas Randall”
Next Gallery: Sick Of It All at House of Vans Brooklyn, New York 8/10/18