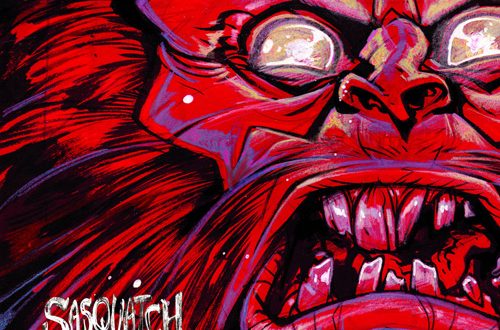 Right from the start, the album grabs listeners by the throat with the aptly titled “I’ll Stop the World and Melt Your Face.” From there, the whole album keeps the volume cranked and the pressure high with a string of earth-shaking hits. Highlights of the album include the band sonically ascending the cliffs of “Coke Mountain,” the breakneck speed of “Boomslang,” and the undeniably headbangable closing minutes of “Made Up of Phantoms.”

Strings are picked fast and drums are pounded hard, adding up to a savage stream of sound. And while Sasquatch Turf War weaves together elements of Black Sabbath, Sleep, and Electric Wizard, the band’s raucous instrumental noise is uniquely their own.

Originally picked up at a record store for having an intriguing name and awesome album art, this record’s excellence came as a pleasant surprise. After such a strong debut, Sasquatch Turf War have us all waiting impatiently for another dose of bone-crushing rock.

For more information, check out www.cavetonerecords.com

Stephen Vicino is the founder of MusicExistence.com. He created this site to give talented musicians a voice and a way to be discovered.
@@svicino
Previous Gallery and Review: Pennywise at House Of Vans Brooklyn, New York 8/10/18
Next Lions Lions Release Music Video for “Circles”