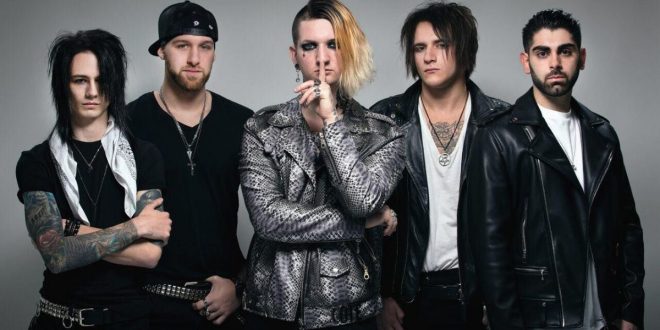 Another Day’s Armor is primed to reinstate heavy rock music’s prominence on the Billboard charts. Having formed in the suburbs of Westchester County, New York, their patient, but assiduous efforts on both local and cyberspace grounds have made them internationally ready. The band has since recruited vocalist Logan Manganelli to front its latest incarnation, his debut on their latest single, “Death Investing,” showing great promise since its promotion through BVTV.

I caught up with the band’s lead guitarist, Nick Palma, to discuss their chemistry, the steadiness of their progression as a unit, as well as their soon to be released debut EP.

ME: The music you guys do combines alternative rock with tinges of metal. When you were growing up, which influences helped develop your musicianship?

Nick: For me, it was originally Guns N Roses. I was a big fan of Slash, and seeing him on stage just got me into the whole rock world; I thought he was so cool. In terms of more modern bands, my favorite is probably Avenged Sevenfold. It’s a whole list of modern bands, but we mostly channel the classics – Alice In Chains, and bands like that. It’s a big arena sound, something everyone can sing along to.

ME: What was it that marked the formation of Another Day’s Armor?

Nick: Three years ago, our drummer Alec [Keshishian] and I were in a different band. It didn’t work out for whatever reason; we were young and things happen, but we’d decided to stick together. I don’t know how our name came about, but when we formed Another Day’s Armor, we needed the right members. We found who we have now and couldn’t be happier.

ME: It seems like it was a natural progression, and you’d felt like just running with it.

Nick: Yeah. There weren’t too many people in our area. It was a lot of searching online, but we didn’t give up. We were determined to find the right members, and it took some time. It actually took longer than we had wanted, but it was worth it.

ME: Yeah, Westchester’s pretty small, from my experience growing up there. But I’m glad you were able to pull through, man!

Nick: Yup! Our singer, Logan, actually lives two hours from us; he’s from New Jersey, right by the shore. We had to outsource a little bit, but we make it work (laughs).

ME: At what point would you say your chemistry between each other really began taking shape?

Nick: That’s a good question, because we feel like we really do have good chemistry. We’d always got along really well. Last fall, we had actually switched vocalists. We had to make that change and it was pretty discouraging, but it had to be done. Looking back, it was definitely a tough time for us as a band. But when we brought Logan in, and jammed with him for a couple weeks, he was great right off the bat. Then, we had some music ready to go, and everything started feeling exciting again. It was just a really fun time, and it honestly brought us closer together.

ME: Yeah, it’s like when Iron Maiden had Paul Di’Anno, but then once Bruce Dickinson joined, that was the next step.

Nick: Yeah. Sometimes, that’s all it takes. Especially with a key member like a singer, the last thing you ever want to think about is having to replace someone like that. At the time, like I’d said, it was super discouraging, and it seemed like the end of the world, at least in our heads. But it’s like you were saying, it’s the next step, and honestly, we have no regrets and are super proud. We have one single for our EP out with our new singer on it, and listening to the EP as a whole, I think its sound is going to resonate with a lot of people.

ME: One of the more immediate things I notice is your emphasis on the visual aspect of the band. When you look back at the history of rock, it seems like a band’s image seems to matter every other decade. These days, how do you feel about image as an asset to modern rock bands?

Nick: In a lot of ways, image can be more important than the sound of the band, at first. When you see a band and they just look like regular dudes, the music might be great, but if you see a picture of them, are you going to check them out? Maybe, maybe not. If you see a band that really looks like a band, I feel personally that that would make you want to listen to them even more. If you’re in a band and you have the opportunity to really focus on that aspect, you’ve got to look cool while playing, man!

It seems like nowadays, modern bands rarely put any real thought or effort into their image. For me, like I’d said, growing up, seeing Slash on stage, he just looked so cool to me, and his image just made me more of a fan, if that makes any sense. So, I think image is super important in today’s scene, and I think it makes us stand out more.

ME: It’s made very clear in your videos, with the most recent being “Death Investing.” Can you tell me a bit about how that got underway?

Nick: We decided that “Death Investing” was going to be the first single, right off the bat. It was the song that was probably the most similar to our previous two singles. We wanted to show people that just because we switched singers, that doesn’t mean we had to make any musical sacrifices necessarily. It’s also probably one of the heavier songs on the EP; we wanted like a dark tonality to it.

For the video, we were talking to the director, Alex Kouvatsos, and he had these vertical lights. We thought the whole scene would look cool with the black and red behind us. I think it sets the mood pretty well, and it ended up looking awesome.

ME: The song was produced by Shaun and Dylan Werle, and I hear you guys also have an EP coming out. Did you guys also work with them for an EP?

Nick: Yeah, they engineered all five songs on the EP, as well as our previous two singles. The final product is great, and we’re really happy with the work they do. It doesn’t sound like a local band, honestly. The production sounds larger than life, and those dudes are super talented at what they do.

ME: That’s what you want – that big, meaty sound.

Nick: It’s really cool, because you’re sitting there in the Protools session, and you see that there’s like a combination of 100 plus tracks of crazy sounds in the background. The thing is, the average listener wouldn’t know it was there, but if it wasn’t, it would probably sound a little empty.

ME: When you release a song, do you think of it as something that stands on its own, or as a piece of an eventually full product?

Nick: I’d say — and I’m sure the rest of the band would agree — that in the context of the EP, each song is different, but they all still sound like us. I’m proud of the fact that these songs have their own personalities. It’s hard to describe, when we know what they sound like, but other people don’t. You can expect the same kinds of elements linking together – big guitars, catchy choruses, solos, things like that, but at the same time, every song sounds different, in a good way.

ME: After making the EP, and just in general, how do you feel you’ve grown as a band?

Nick: Honestly, from a musical standpoint, we’ve grown a lot. We’ve written much better songs just from having done it for years, working together, recognizing everyone’s strengths, and playing off one another. One of the biggest ways we’ve grown as a band is through the business aspect, which isn’t the most fun part, but is definitely just as important as anything else. From years of trial and error and learning what not to do, I feel like we’ve improved so much. It’s not the most encouraging way to learn things, but it’s efficient, in my opinion. Learning what not to do holds equal importance as learning what to do.

ME: You do the things you’re already good at, while focusing on the stuff you’re not great at, and eventually, the latter becomes something in the back of your mind.

Nick: Exactly, yeah. And to this day, when we have to get something done, it’s interesting sometimes to think back, knowing we would have handled it in a completely different way. Thankfully, we’re more knowledgeable now and have a much better handle on things.

Nick: Thank you so much for supporting us, whether it’s by buying one of our T-shirts, or listening to a single stream, everything helps, especially for an up-and-coming band, and nothing goes unappreciated. We’re playing shows and there’s people who know us. It feels surreal, it’s so cool, and I’m just so thankful for everyone who listens to us.

I come from a family who is passionate about all things music. I learned to sing at an early age, and by 13, had my very own Fender Strat guitar. I tried my hardest at learning all that I could. Because I was born with cerebral palsy, I had to teach myself an adaptive playing style. I learned to write and record my own music, despite these difficulties. In college, I started making great use of my writing abilities by reviewing music, as well as copy editing. I guess it's best to stick with what you know, while welcoming a fair challenge at the same time.
Previous Tedeschi Trucks, Wheels of Soul Tour, Red Rocks Amphitheater, July 28, 2018
Next Gallery: G-Eazy at Walmart Amp in Rogers, AR 8/11/18