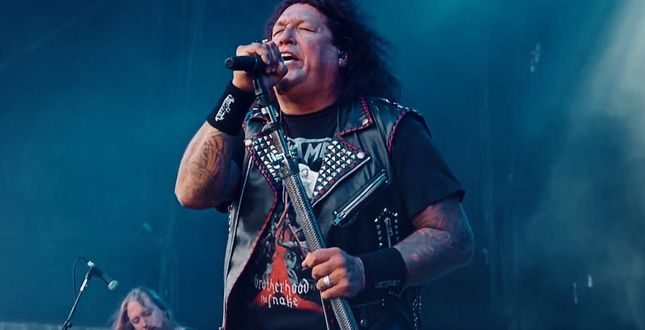 Back in 2015, Testament vocalist Chuck Billy teamed up with Lord Vaper Pens to introduce his signature product line, The Chief, its name an ode to his Native American heritage. Today, he has expanded the line to include three new products: a 2-in-1 vaporizer and battery called the Wardrum, an interchangeable oil cartridge-based vaporizer called the Dreamcatcher, and a pipe called the Tomahawk. In addition, there is a general merchandise extension called The Chief of Thrash, including T-shirts, bags, phone cases and posters. All items can be purchased through www.LordVaperUSA.com.

During the promotion of these new products, Billy was open for an interview. He is currently with Testament on the farewell tour of fellow thrash legends Slayer, which features off dates with Lamb of God and Anthrax. All four bands are close with one another, having supported each other for years across a myriad of shows. This tour also coincides with the anniversary of Testament’s sophomore album, The New Order, released in 1988.

Before talking of his revamped line, we initially focused on how the tour was panning out. “The shows have been awesome!” Billy says. “It’s great to be playing Slayer’s farewell. Especially if it’s truly their farewell tour, they’re doing it right. It’s a great show and production; it really is. And they’re playing better than ever!”

While Testament enjoys the liberation as one of Slayer’s longtime supporting acts, such a role doesn’t come without its challenges, including having to condense their setlist. “This is a 35-minute show, so it’s tough to pick only seven out of hundreds of songs.” admits Billy. He continues, “We lean toward some stuff from the new record, but then go back to the old-school; it’s the 30th Anniversary of The New Order, so we’d have to include at least three off that. Then, maybe one from The Legacy, and then a couple off Brotherhood of the Snake.” “But we’re having a lot of fun,” he assures.

Testament’s tour initiated at the beginning of the year and runs until the near-tail end of August, much of the dates back-to-back; but the band couldn’t be happier.

“When we’re on a tour like this, we’re almost spoiled.” Billy remarks, after asked how he and the band maintain high spirits. “We’ve got nice venues, big crowds who feed us well on our travels, and it’s a big family out here. It makes us feel so nice and comfortable. Every day, we’d wake up and be like, ‘Man, 35 minutes? Okay!’ We’re so used to playing hour-and-45-minute shows, so to go from that to only 35, it’s actually kind of easy. It’s cool getting to see Slayer every night, and Anthrax and Lamb of God, too. After the easy set, I’d say it’s pretty awesome,” he laughs.

Next, Billy spoke of his formative musical memories, having been born to a Native American father and Mexican mother. Although uncertain whether his parents had direct influence on his musical interests, he recalls his mother’s ambitions as a singer. “I think she wanted to be a professional singer,” he ponders. “She was performing and did a record for the Red Cross when she was younger.” Around the same time, however, Billy’s mother would experience a tragedy that drastically altered her outlook on a potential singing career.

“When she was 16,” he continues, “her mother and her sister were coming to see her, but got in a car wreck and died, and she stopped singing at that point. By the time I started playing music and singing, she’d kept that feeling. She was like, ‘No, no, no! Don’t be a singer; go to school and get a job!’ But as we started making records and touring, and she recognized that this was a real path, she began to really believe in the band and what I did.”

Because of Testament’s longstanding musical achievements over time, Billy was granted the opportunity to take part in a ceremony that reinvigorated his kinship with his Native American roots, where such iconic Native acts as the XIT, Winterhawk, and Redbone were present.

“I’d met a lot of those bands and was actually fortunate enough to do the very first Native American Music Awards, in Muskegon. Wayne Newton was the emcee, and there were so many Indian artists. At first, I was unaware of just how many there were, but a lot of them were selling platinum records, you know? I was like, ‘Oh wow! Why haven’t I heard of these guys?’ They’ve been touring around reservations, and basically making a living playing to their people!” he laughs.

With milestones in mind, our conversation shifted to Billy’s recent product line, The Chief, starting with his interest in vaporizers, and how he’d eventually team up with Lord Vaper Pens.

“I’ve been a longtime smoker, and a few years ago, Lord Vaper approached me to see if I was interested in creating a vaporizer. So, we put out the first Chief, and it did well.”

The initial product’s standing couldn’t hold out for a longer term, however, due to financial issues. Not only had the product discontinued, the company was eventually sold. Even so, the original plan prevailed and was put into action head-on once the company was purchased.

“The new owner had asked if I wanted to continue with the Chief brand again, and I said ‘Yeah, of course!’ So, we came up with some new products.”

Aside from a revamped version of the Chief device, the first new product was the Wardrum, which comes supplied with its own battery for on-the-go use.

“To me, that’s what the beauty of the vaporizer is,” Billy says. “I like smoking a joint, but there are places where I can’t, like a Raiders game, the movies, or when I’m on a long flight. That’s when my vaporizer comes in very handy,” he laughs. “When you vaporize, you’re only burning the THC off the leaf,” he continues. “So, you actually end up getting more of the effect than you do smoking a joint.”

Billy points out that the line isn’t just for casual marijuana smokers, but aids in medicinal use as well, saying, “I have a sister-in-law who was sick a few years ago with cancer. She’s older than I am and grew up at a time when weed was criminalized, so she didn’t smoke it. But once she got cancer recently, her doctor recommended she try it. She didn’t have an appetite, and when I showed her how to vape, it helped keep that in check.” Billy adds, “A puff from a joint would’ve made her cough her brains out, but with vapor, it’s an easy draw and feels like nothing; it’s very mellow.”

For those who don’t smoke marijuana, Billy recommends the Dreamcatcher, as it can also be used to hold CBD oils, besides THC. “CBD oils are best for anxiety, body aches and pains. If you know someone who isn’t used to smoking, or is interested in CBD, this can be great for them.”

The third product in the line is the Tomahawk, a pipe with a built-in lighter, which Billy praises for its discreetness.

“With a traditional marijuana pipe, something like that would require two hands – one to hold the pipe, and one to hold the lighter and light the pipe. But with the Tomahawk it’s just a simple, inconspicuous touch of a button to light the weed. Pretty much every base is covered!”

All in all, Billy remains positive for the longevity of The Chief line.

“These products are not novelty items; they’re the real deal. Like I mentioned before, I use them for movies, Raiders games, plane flights – wherever you can’t light up in public – and they work really well. Just keep spreading the word!”

I come from a family who is passionate about all things music. I learned to sing at an early age, and by 13, had my very own Fender Strat guitar. I tried my hardest at learning all that I could. Because I was born with cerebral palsy, I had to teach myself an adaptive playing style. I learned to write and record my own music, despite these difficulties. In college, I started making great use of my writing abilities by reviewing music, as well as copy editing. I guess it's best to stick with what you know, while welcoming a fair challenge at the same time.
Previous Watch DVSN’s cinematic new “Morning After” music video
Next Gallery: Cherry Glazerr at House of Vans in Brooklyn, NY 8/3/18