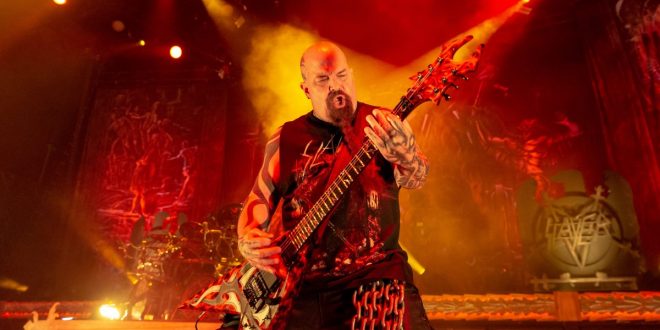 As one of the most inspirational bands in metal history and one of the Big “4”, Slayer while still on top with over three decades of aggression under their belt are currently on the second leg of their “Final World Tour”. With fans from all age groups anxiously awaiting with anticipation to witness what very well be the last time they see Slayer live in New York, “Delusions of Savior” comes over the PA system as the crowd erupts into a defining roar as the images of crosses and pentagrams spinning in circles on the curtain hiding the stage as walls of fire blaze as Slayer takes to the stage. As the curtain falls all hell breaks loose to the fast, heavy, hard-hitting sounds of  “Repentless”, with bodies flying over the barrier from all directions, huge burst of flames shooting out over the stage setting a blaze for “Blood Red” and “Disciple” followed by a classic tale of living “Mandatory Suicide” before spreading “Hate Worldwide”. Usually not one for many words during shows, Araya would address the crowd by thanking them for coming and hoping they have a good time as he then had the crowd on the count of three yell out “War” to intro the next classic crowd invoking “War Ensemble”. Slayer continued their attack with “Jihad” and “When the Stillness Comes” before leading the crowd into a tomb of a corpse yet conceived with the classic “Postmortem”.

After reaching the halfway mark of their set it was time to fight the “Black Magic” before learning a lesson in “Payback”. As we stepped outside ourselves for “Seasons in the Abyss” we also learned the story about a man named Ed in “Dead Skin Mask”. With “Hell Awaits” came an insane pyro show with walls of fire a top the Marshall amps, while burst of fire created the band’s signature four sword pentagram high above the head of drummer Paul Bostaph. Immediately following “South of Heaven” the lights went completely red as Holt, Araya, and King surround Bostaph’s drum kit. As Bostaph continuously pounded on the drums during a more lengthier intro then usual, the crowd hungry with anticipation awaiting the unforgettable opening riff to “Raining Blood”. After being trapped in purgatory it was directly into “Chemical Warfare”, with the show coming to a close it was time for the Slayer to pay their respects to their fallen brother Jeff Hanneman with what became his anthem song “Angel of Death”. With the opening riff the stage lights set green, Araya let out his primal scream as the final backdrop fell revealing the legendary Hanneman banner. With what seemed to be the entire audience in tune signing along word for word as one of the most iconic and influential metal bands of all time played what could very well possibly be the last song we may ever see them play at the Jones Beach Theater. As the saying goes all good things must come to an end eventually, I’m positive no one ever thought they were talking about Slayer. With fans on the feet cheering Slayer and raising their horns as a salute to the band Tom Ayara would say his final words of the evening thanking the fans for everything and also mentioning he will miss everyone.

Thank You Slayer for all the music you gave us and the awesome live shows we all have seen throughout the years I can’t say there was ever a bad one.

NewYork Based Photographer. Music Enthusiast with a background in Graphic Design. Whether I'm shooting a live event or just out wondering the streets its about capturing the moment.
Previous Gallery and Review: Lamb Of God at Northwell Health at Jones Beach Theater 7/29/18
Next Moment In Time