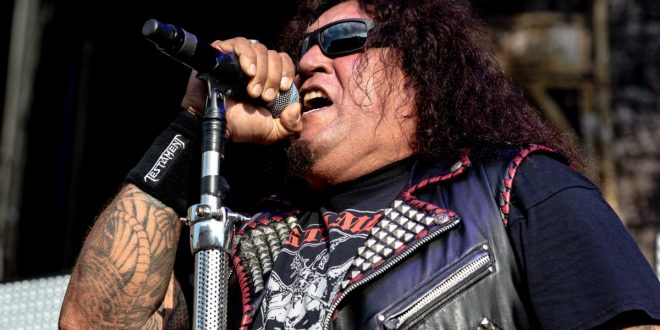 Returning for the second leg of Slayer’s Final World Tour, veteran bay area thrashers Testament took to the stage at Jones Beach under the blazing sun for a 40 minute set that would only allow the band time for 8 songs. With little time to waste the band came right out swinging hard with some of their newer material, opening with the title track off their 2016 LP “Brotherhood of the Snake” and would follow up right behind with “Rise Up”, they then took it back to the 90’s with “Dog Faced Gods”. As the band hit the halfway mark on their set it seemed the perfect time for classic Testament as they hammered out the title track off their 1988 sophomore album “The New Order” which some may argue to be the bands best album to date. After two more songs it was back to “The New Order” with the bands anthem song “Into the Pit”, which only left fans hungry for more as “The Chief” Chuck Billy announced that they had enough time for one more song “Disciples of the Watch”. Unfortunately there were a few songs of the earlier years that I wish would have made the setlist like “Over the Wall”, Trial By Fire”, and even “Practice What You Preach” but if that were the case the setlist would have looked a little less diverse, with that being said Testament came out hard and heavy for a solid 40 minutes and didn’t let anyone down if anything they only left fans hungry for a lot more.

NewYork Based Photographer. Music Enthusiast with a background in Graphic Design. Whether I'm shooting a live event or just out wondering the streets its about capturing the moment.
Previous Single Review: Holiday – “Red Summer” (Out Tomorrow)
Next Album Review: Sundodger – Bigger Waves