Home / Headline News / Win Your Way In To See: The Smithereens in Evanston, IL! on 7/27 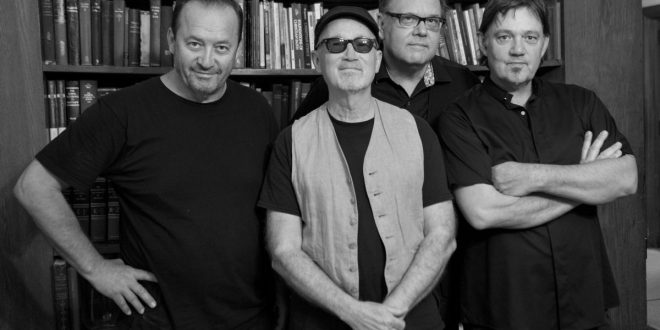 Win Your Way In To See: The Smithereens in Evanston, IL! on 7/27

The Smithereens are one of America’s musical treasures.  Originally formed in New Jersey in 1980, the band’s timeless power-pop sound – rife with strong, catchy melodies, meaningful lyrics, and walls of layered guitar, bass, and drums – remains intact.  Huge fans of Buddy Holly and the 60s British Invasion (particularly the Beatles, Kinks and the Who), along with Elvis Costello and Nick Lowe, the band incorporated these influences and wore them proudly on their musical sleeves as they developed their own original style and sound. Anyone who has heard them on record and seen them live knows they are in for a bold and brash treat, with the band’s creative mix of melodic pop structures, lyrical prowess and crashing waterfalls of high energy sound enabling them to continue to be one of power pop’s most interesting and entertaining bands. Signature songs like “Blood and Roses,” “A Girl Like You”, “Only a Memory,” “Behind the Wall of Sleep,” and a raft of critically-acclaimed albums (Especially for You, Green Thoughts, 11 and many others) have cemented the band’s place in the hearts, minds and ears of their devoted worldwide fan-base.

The band continues to tour with three original members (Babjak, Diken, and bassist Mike Mesaros) despite the tragic death in 2017 of founding lead singer, songwriter, guitarist Pat DiNizio. The band is currently fronted by another noteworthy veteran of the power-pop scene, Marshall Crenshall, who is enjoying his time touring with the band while also having established his own noteworthy career, which includes having a Top 40 hit in 1982 with Someday, Someway.  Marshall does a great job of carrying on the tradition and high standards the band have set for themselves and for their fans over the years.

To enter to win two tickets and a meet & greet with band for their show at Evanston Rocks in Evanston, IL on Friday, July 27th. To Purchase tickets for the show click HERE.

Previous MOOON – Everything Flows
Next REVIEW: Crack of Dawn – Spotlight