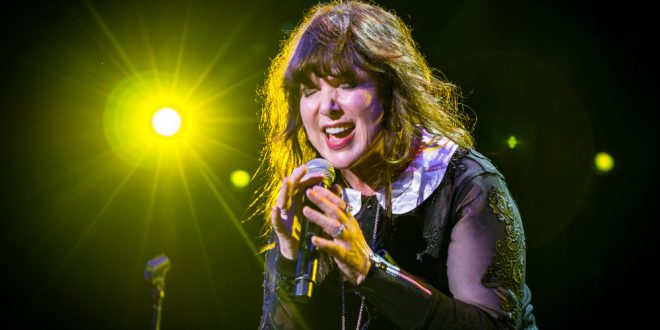 Legendary rock singer, Ann Wilson of Heart, has announced an upcoming solo album called Immortal.  The album is a collection of cover songs from dearly departed musicians such as Chris Cornell (Audioslave), Tom Petty, David Bowie, Glenn Frey (the Eagles), amongst others (see full track list below), and is due out on September 14, 2018. Ann took some time to talk to MusicExistence to discuss it and her summer tour with Jeff Beck and Paul Rodgers, which just got underway.

Immortal is a unique project, the “point [of which] was to honor these artists who passed away recently,” Wilson described. She went on to explain, “I knew Chris Cornell the best. I never met Bowie [or] Leonard Cohen… but I’ve shaken hands with [just] about all of them.”

Regarding song selection for the project, Ann said, “I went back through their bodies of work and chose the ones that resonate with me the best. I wanted to get inside the lyrics and the meanings of the songs…and to a lesser degree, wanted to choose songs that resonated in today’s world.”

The album isn’t distinctive based solely on its concept, but also for the way in which has Wilson interpreted the songs by changing tempo, style or flavor, and thus making them her own. “I basically just let the songs tell me what to do,” when asked how she created her takes on these songs. “They speak pretty loud if you listen the right way.”

The Chris Cornell/Audioslave song, I Am The Highway, is the first single (and is available now when you pre-order the album, or listen on streaming services), which Ann said was the label’s choice. “I gave the whole finished record to the record company and said ‘I like all these songs, so you guys just go ahead and release them on your own schedule,’ and they chose the Chris Cornell song.”

When asked whether it was tough recording songs of people she knew personally who have died, Ann responded, “I had a couple of moments with my heart in my throat…but I don’t think there’s much wisdom in being mournful and sad about when a soul departs. I felt better about being joyful about what [Chris Cornell] did do while he was here.”

Ann will be on the road this summer as part of a package tour with Jeff Beck and Paul Rodgers, called the Stars Align tour (tickets available on Live Nation: https://www.livenation.com/artists/91970/ann-wilson). Her opening slot is a 45 minute affair that features new songs from Immortal, and “a couple of songs I’ve written in the last few years, one Heart song, and a couple of other surprises,” she said.

Her band for this tour is comprised of Craig Bartock (also of Heart) on guitar, Andy Stoller on bass, Dan Walker on keyboards, and Denny Fongheiser on drums. Ann related that the first night of the tour was a really hot performance…literally. “The first night was extremely hot, like 105 degrees up there in direct sunlight! But we just put on our sunglasses and grin and bore it…and it was a really good set and the audience was really into it.” Excited to be playing on this tour with her tourmates, Wilson related, “Beck and Rodgers were both just amazing [on opening night]. [The tour] is a lot of really good music.”

You can follow Ann Wilson on social media at these locations: