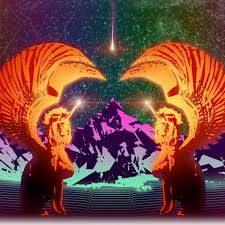 Like the harmonizing of a thousand angelic voices uniting together to create one single spellbinding force to be reckoned with, “Welcoming Party” invites us directly into the insular, unforgivingly atmospheric universe of space age tones and ethereal cries of war and peace that Balloon Ride Fantasy dispatches with little inhibition on their stellar new extended play BRF, due out for international release this coming July 20th at the height of summer. It doesn’t take long for us to get into the groove of things and get lost in the flow of the song, which quickly picks up in tempo and accelerates into a full on assault on our eardrums, complete with a vicious bass and vocals that soar upward into the heavenly ethers that gave birth to them. As the dust settles and the exotic foreboding stride of “Arcadia” plants itself in our scope of vision and overwhelms us with its colorful textures, we start to float along to the staggeringly weightless beat whether we want to or not, and it starts to become clear that Balloon Ride Fantasy is in complete control of what happens next, both emotionally and physically, on this adventure into the misty unknown. “Human Bird” deceives us into thinking that we’ve reached some sort of an oasis of stability before wasting no time in ripping the carpet from beneath our feet and allowing us to careen into the most exciting and primal catharsis of the entire record during its fun, freewheeling chorus. The glare of the spotlight starts to warm us and it’s almost like we’re in the club with Balloon Ride Fantasy instead of listening to their studio dabblings, something that makes this release stand out in stark creative opposition to the artificiality of the bulk of 2018’s pop output to date.

The intimate nature of the first half of BRF isn’t lost on the second, with “Gods Beyond the Moon” picking up the pieces from “Human Bird” and pushing them into an effectively dizzying and hypnotic rhythm that is as haunting as it is danceable. It doesn’t become clear until after listening to BRF in its entirety that the track is largely a primer for the awe inspiring pop gold that is “Robots in Lust (Night Song),” by far the most accomplished and mature song that Balloon Ride Fantasy have released in their career thus far. Steeped heavily in the funky, dark ambient grooves of old school industrial pop and glazed with a dreamy arrangement and production that allows it to play out like a piece of high society art, it’s solid enough to earn my nomination for best non-single track of the year. As “Heartfighter” launches us into a swirling, cataclysmically charming whirlwind that brings BRF to an elegant ending, the only complaint that I was really left with as a critic and as a new fan is that there isn’t a seventh track to follow up this one. But even though I could have stood to hear a little more from these guys, their point was made and my attention forever captured. In summary; BRF packs the biggest punch of any extended play I’ve reviewed this year, and it would be criminal for any music enthusiast not to catch a glimpse of what this band is doing for pop right now, period.

Previous Gallery: The Maine at Vans Warped Tour 2018 – Holmdel, NJ
Next THE CABIN FEVERS the revelation of Pistoia Blues 2018 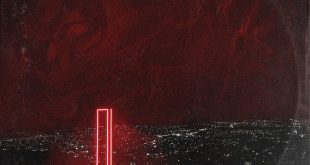