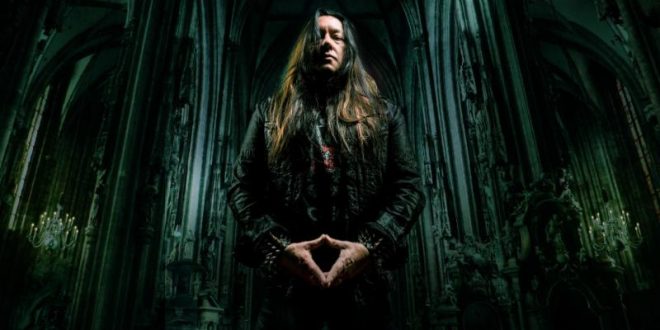 6
SHARES
FacebookTwitter
TESTAMENT & DRAGONLORD’s Eric Peterson to Sign Copies of his New Black Metal-Influenced Comic, “THE BURNER” at San Diego Comic Con Tomorrow!
Signing exclusive copies of THE BURNER during the Testament signing at the Nuclear Blast/Stern Pinball/JSR Merchandising Booth (#501)
New Album, Dominion, out September 21, 2018 via Spinefarm Records
Pre-Order Album & Merch Here | Stream/Download via Additional Retailers Here
Renowned Testament guitarist Eric Peterson recently announced the release of his highly-anticipated new DRAGONLORD album, entitled Dominion, out September 21, 2018 via Spinefarm Records. The symphonic black/death metal album serves as the long-awaited follow-up to 2005’s Black Wings of Destiny, but takes the fantasy and storytelling to a whole new level. Dominion explores themes of darkness owning and influencing these times we now live in, and things that have come to pass. It also delves into other eras, real and otherworldly.
Digital and physical pre-orders for Dominion are live here: Physical + Merch | Digital. Get a taste of Dominion now by streaming the album’s title track via lyric video here: https://youtu.be/zweLMniS-fQ
Eric Peterson is pleased to announce that he will be signing copies of his exclusive, fully original, 20-page full color comic, THE BURNER (available at the booth for $15), at San Diego Comic Con during his Testament signing on Thursday, July 19 from 2:00-3:00 PM. The signing will take place at the Nuclear Blast/Stern Pinball/JSR Merchandising Booth (#501). THE BURNER is only available at San Diego Comic Con as of now, but Eric Peterson hopes to release the comic for sale via other retailers in the future. There are limited copies available, so comic enthusiasts and heavy metal fans alike shouldn’t miss their chance to collect this special comic!
THE BURNER is the first ever black metal superhero! Brought to earth for centuries, avenging the souls abused by power, he now comes face to face with something he wasn’t ready to fight – himself! THE BURNER is a creature from a “dragon planet” within our galaxy who has an otherworldly and inexplicable mental connection (through dreams and visions) to Eric Peterson’s own character in the comic. In the comic, Eric thinks he’s just writing DRAGONLORD songs and lyrics on his own, but little does he know, The Burner is behind it all!
THE BURNER is the first part in a series, and was illustrated by Chimp 9 (Chainsaw Bob [Spike and Mike’s Sick and Twisted], Marvel Comics, Dead Ahead, Death Race 2010, Vincent Price Presents, TOPPS, DHC, Rock and Roll Biographies, Eclipse), Mats Engesten(Death Race 2010, The Seven Lives of Dr. Phibes, Rock and Roll Biographies), Vic Moya(Star Trek, IDW Comics, Genesis II, Rock and Roll Biographies), and Ross Hughes (SLG, Rock and Roll Biographies, Charlie and Humphrey, Creepy Kofy Movie Time comics) with cover artwork illustration by Christian Hall (Amon Amarth, Dimmu Borgir, Testament).
Read more about THE BURNER and the other products available at booth #501 here: https://www.comic-con.org/cci/2018/exclusive-product?c=312
Eric Peterson says: “Greetings, Con fans! I’m so excited to be at San Diego Comic Con on Thursday the 19th with my band Testament to sign some really cool art that we have had drawn up for us, and I have a new dark fantasy comic book with black metal influences called THE BURNER that I’ll be signing there as well! Come check us out at booth #501, say hello, and pick up a copy of THE BURNER!”
Eric Peterson – Photo Credit: Richard Haick

NewYork Based Photographer. Music Enthusiast with a background in Graphic Design. Whether I'm shooting a live event or just out wondering the streets its about capturing the moment.
Previous Gallery: Waterparks at Vans Warped Tour 2018 – Holmdel, NJ
Next Gallery and Review: Yes Golden Anniversary Tour at The Paramount Theater Peekskill, NY 7/17/18