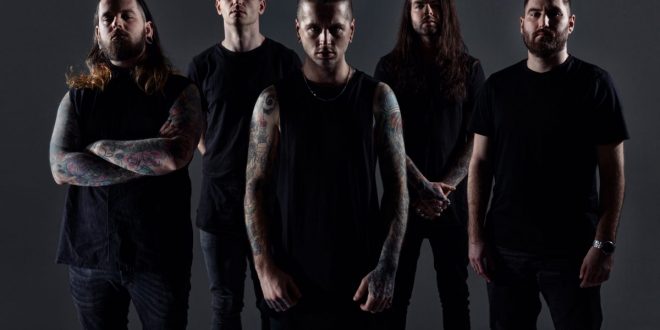 Bury Tomorrow are annoyingly good. It’s almost exhausting to listen to their brand new album Black Flame, since every track demands your undivided attention. This monolithic record is the fifth from the Hampshire quintet, and for me it was instantly added to my list of favourite metal albums. If you’re seeking something to quell your boredom for an hour, Black Flame may well be the revitalising hit you need.

Bury Tomorrow are experts in hardcore metal, and that much is evident from the very first track “No Less Violent.” It has the perfect balance between clean and unclean vocals, melodic guitar and heavy riffs, to make it inarguably brilliant.

Eponymous track “Black Flame” introduced us to this new album cycle, and it is totally understandable why this monumental track was picked to do so.

“More Than Mortal” is so venomous and bitter, it’s not as easy to swallow. But it’s still so packed with character that it’s a welcome addition to the album.

“Stormbringer” might sound more like a Marvel Comics character than a heavy metal song, but I’m not sure it’ll make it onto a Thor soundtrack any time soon. It’d be their loss though, since this song pushes the boundaries of melodic metalcore. Guitarist Kristan Dawson needs special commendation for his work throughout the chorus of this track, and also maybe a spa appointment to look after those fingers.

Black Flame ends as ferocious as it began. “Peacekeeper” doesn’t pull any punches, with Dani Winter-Bates delivering his vocals with the same intensity as he has throughout this record.

I’m always wary when a band hypes up an album as the best one of their career, but maybe I’m just too pessimistic for my own good. Bury Tomorrow are clearly immensely proud of this body of work, and they have every right to be. They want this album to be a flash-point in their career, and the beginning of their legacy. It’s Bury Tomorrow but sounding bigger and better than they’ve ever been. If you’ve somehow never listened to them up to this point, now is the time to start: Black Flame is worth the effort.

Black Flame is available to buy and stream right now.