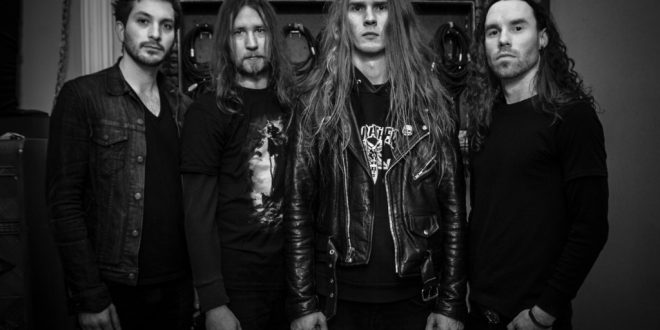 It’s been three years since the bands debut of “Terms of Surrender” under the independent label e0ne Music and now the St. Louis thrashers Black Fast are back and have just release their sophomore album “Spectre of Ruin”. On May 7th the band gave us the first taste of new music from “Spectre of Lies” with the premier of their new video for the single “Cloak of Lies”. Music Existence had the opportunity to sit down with members Aaron, Trevor and Ross to discus the new album along how the band first got started.

ME: How did you guys originally meet?

Trevor,  In 2008 attending school at the University in Southern Illinois which is 25 minutes across the river from St. Louis met Aaron at a gas station and a week later met Ross who was his roommate.

ME: You met Aaron at a gas station?

Trevor, Yeah he was in line behind me. I was going to school for Jazz and had always wanted to play metal and start up a band I just needed to the guys. I was in line and said to myself thats him, he fits the part (laughter) Ross, I moved down to Edwardsville from central Illinois on a whim because the music scene was dead where I was living and I needed some people to play with so I had to get the hell out of there. At the house I was living at we would throw parties and through a friend that had live down the hall from Trevor on campus said he knew a guy that played guitar and was into metal. We started playing together and I was living with Aaron, Ryan our bass player was going to school with Trevor so we all just got together.

Aaron, We were all living in a big ass house that was throwing parties centered around having open jam sessions. There was people that wanted to play so we were feeling it out and said hey lets start a metal band and its been about 8 years since our first show.

ME: Where did the name Black Fast come from?

Aaron,  At first we were a bad that just played shows without a name we were the no mane band from St. Louis (Laughter) It was something that I had been stewing on since I was a kid, it was something I had heard from someone that before a priest would an exercism he would fast and that fast would be called the Black Fast

Aaron, The whole starving yourself thing before confronting the demons I thought thats cool! That would be a cool name for a metal band some day. That was when I was young, so young that certain metal bands scared me. I saw a Slayer VHS tape when I was like 7 and it scared the shit out of me (Laughter) thats when the wheels start turning .

Aaron, Yeah in August of 2015. We signed with e0ne in November and a few months after that went into the studio in January of “15” and put out the record in August.

ME: That record was produced by Erik Rutan right?

ME: Was the new album “Spectre of Ruin” produced by Erik as well?

Aaron, Yeah Erik produced this one as well.

Me: With your new album did you go into the studio doing anything different then you did with the first album?

Trevor, having worked with Erik on the first album we were a little sharper, we knew what to expect, we were more prepared even with the song writing since we had done it before.

Aaron, We had also been on the road for a year and half pretty heavily so we had more of our shit together more. The first time we went into the studio we were pretty green, we had all the songs written obviously.

Trevor, Thats why it sounds the way it does awesome

Ross, we spend a lot of time capturing the tone

Trevor, we try everything

Ross, It was cool! I was definitely more comfortable unstanding exactly what we were walking into, not that it was anything uncomfortable in the first place but just knowing the studio , knowing Erik actually having built a relationship with him.

Aaron, Just having that thing, OK its not like I think I can do this it’s no I know I can do this because I’ve already done this.

ME:  “Cloak  of Lies” is your first single off the new album, what made you decide that this would be the first single?

Trevor, Well its got a little bit of everything in it, It’s heavy on the riffs, It’s heavy right from the initial attack.

Aaron, Right away we knew it had to be track one it had to open the the record because it just starts immediately we all just thought it would be a cool way to open the record.

ME: I myself had to play it over aa couple of times when I first listened to the album. I wasn’t sure if it was buffering and I was missing something when started.

ME: Can you explain for me the concept behind the artwork for the “Cloak of Lies” single?

Aaron, It came from the original album its a cropped image off the full artwork for the cover. It was done by Mark Richards from San Diego who had did artwork for some of our shirts in the past so when it was time to do the cover art we said lets get a hold of Mark

Aaron, Yeah definitely! I gave him this outline kind of ideal and basically let him run with it.

Trevor, It’s pretty in depth, the record tells a story it’s basically a concept record. The Spectre of Ruin tells a story.

ME: Is there anything planned for the future you can talk about?

Trevor, We have a another single coming soon that we will announce the day of, thats really all we can say about that now.

Aaron, Touring Europe we would like to get out to there. We’ve gotten a lot messages and request from fans asking about us coming to Europe and other places like South America as well.

ME: “Spectre of Ruins” out now on all major music platforms and be sure to check tour dates below to catch Black Fast out on the road as direct support for Ringworm.

NewYork Based Photographer. Music Enthusiast with a background in Graphic Design. Whether I'm shooting a live event or just out wondering the streets its about capturing the moment.
Previous Album Review: Deafheaven – Ordinary Corrupt Human Love
Next Lights Like Autumn Release Lyric Video For “Roulette”