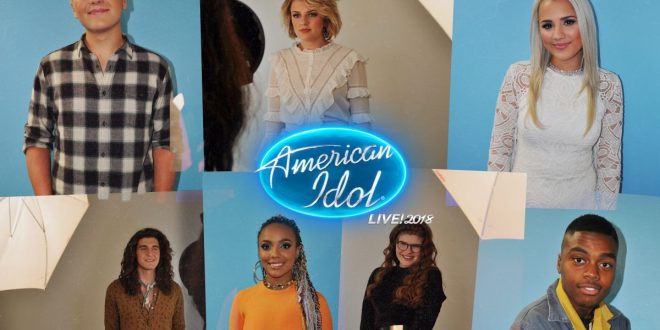 American Idol is now, quite literally, taking the show on the road. Following its warmly-received television relaunch back in March, the series will realize a new milestone in the American Idol Live! 2018 Tour. The three-month-long, 40-city tour comprises seven finalists from the show’s current season: Cade Foehner, Caleb Lee Hutchinson, Catie Turner, Gabby Barrett, Jurnee, Maddie Poppe, and Michael J. Woodard. Guests on this tour will include Season 8 winner Kris Allen, and the group In Real Life (last year’s winners of ABC’s Boyband series) on select dates. Tickets can be purchased through www.AmericanIdolLive.com. Additionally, ViP packages are sold through VIPNation.com, allowing fans front row seating and meets and greets with the cast.

In preparation for the tour, I caught up with the finalist Jurnee Siani, a budding Denver, Colorado-based singer-songwriter best known by her mononym. We discussed her involvement with the show and tour, her diverse musical upbringing, as well as her ultimate means for showcasing the fullest extent of her artistry.

ME: The return of American Idol is something that so many have been divided over, especially since similar shows have achieved massive popularity. What had your thoughts been about American Idol’s comeback in general?

Jurnee: It was crazy, because I’ve never actually watched the show before then. The first time I’d auditioned was on what would have been the final season, and that’s where I kind of developed my love for the show — while on it; even though I didn’t get very far. So, being that I didn’t get far that year, I was sad because I’d wanted a chance to redeem myself. But then once they announced the show was coming back, I was way more motivated to do it. I was excited to be able to come back as an authentic person and have that spirit.

ME: That’s awesome! Right now, the tour is what’s big. How did all of you first get involved?

Jurnee: Initially, we didn’t even know there was going to be a tour, let alone who was going to be part of it. It was just something up in the air, and we were nervous to find out what would come of it. Then, they did announce there would be a tour, and we were all vying for the spot on it and going crazy! At some point, they decided to make it a top seven tour, where the top seven finalists would go and tour America, and see all this crazy cool stuff. It got pretty competitive at that point, believe me. But it was really cool once I realized I was in the top seven, so I’ve just been preparing for that moment to be on tour.

ME: As this is coming really soon, how excited are you?

Jurnee: Oh God, I’m so excited! Half of it is because I get to meet all these people who are supporting me. The other half is because I love food, and I get to try all these different types of food in different states. It’s just a whirlwind of adventure!

ME: Let’s go back a bit. Your journey — and that’s an obvious pun — begins when you were two years old.

ME: If you can remember, what was your musical environment like?

Jurnee: Growing up, my dad brought me up on a lot of rock — heavy rock at that. I ended up loving bands like Amon Amarth, Nine Inch Nails, and Type O Negative. Then, there’s my mom, who did ballet and was into classical pieces, like the Nutcracker, but also 50 Cent and Eminem. Being a singer herself, she helped me with my own voice and gave me advice. It was a very versatile and interesting range of music to be exposed to.

ME: From your initial audition with “Rise Up,” to “Never Enough” in your Greatest Showman performance, I can immediately sense not just the strength, but the control in your vocals. What do you take away from how much you’ve grown as a vocalist?

Jurnee: The main thing I’ve taken away doesn’t even have to do with my vocals. I mean, of course they’ve improved, thanks to my vocal coaches. But it’s mainly this confidence within myself that’s been building. When you’re exposed to a lot of different things, you start to notice what you like, but also what you really don’t like, and that helps build character. More than anything, I’m more aware of who I am now than when I started. That’s something that applies not just to my music career, but anywhere. I’m able to now make much stronger, final choices since I’ve come to recognize what will or won’t waver.

ME: A highlight career moment was definitely in the latter performance, where your wife was in the audience! I don’t know whether that was planned, or she intended to be right there supporting you, but either way, that’s awesome.

Jurnee: That was amazing! It’s always spontaneous, because with her being in the army, I never know when she will or won’t get time off. She has to put in a pass, send it all the way up to the commander, and then back down just for one potential day off. We had no idea whether this was going to work out or not, and we found out maybe two or three days before, that she was actually going to come out. Part of me was super excited, and the other part was super nervous, because she’s one of the most important people who I care about appreciating my music and what I’m doing. Regardless whether she was there or not, singing for her would be a huge deal.

Her being there is ultimately what led to such a breakout moment for me, because that performance came from a raw and true place.

ME: One thing I was particularly inspired by was how you two met. Especially nowadays, there’s a plethora of technology that has made us fickle when it comes to pursuing serious relationships. But in your case, you felt that connection the day you met each other. How did you recognize that the connection between you was sincere?

Jurnee: It was kind of a weird thing when we met. Usually when you’re at a party, you’re hanging out with everyone, running around being crazy. But for some reason when I saw her at that party, I was tuned into her and she felt the same. We ended up talking for hours and hours, and kind of forgot there was even a party going on. It didn’t feel like it was getting to know her; it felt like I knew her like I have already—my whole life. She was my best friend that I also happened to be attracted to. It was this weird, crazy connection that just felt that good as soon as it happened. Before the party, I was like “I don’t wanna go,” but then I was like “Ah, well, ya never know; ya might meet your soulmate,” and then I was like “Yeah, whatever; that doesn’t happen, Jurnee.” But when I went, that’s exactly what happened, and I think some things are just meant to be.

If I hadn’t met her that night, I wouldn’t have even auditioned again. I would’ve been at a stage of not doing any music, self-reflecting after a bad breakup. So, she’s changed everything for me.

ME: I understand where you’re coming from. I can tell that she transformed you and made you a better person inside.

Jurnee: She definitely has. I’ve channeled parts of myself I didn’t know were there that exist in her. She is the other half I’ve been missing; she completes me. She teaches me things about myself every day that I never would’ve known.

ME: In other words, what your goal accumulates to is recognizing your full self, in spite of senseless barriers, whether they’re in your head, or right in front of you. I admire that.

Jurnee: Yeah, definitely. I put everything I have into everything I do, and I wouldn’t be able to do that if I didn’t know who I was. You can’t put your all into something until you’re confident with who you are.

ME: On that topic of how to best showcase yourself, it got me thinking about another point you’d mentioned in your introduction – how you’ve been writing original songs since you were seven, is that right?

Jurnee: Yes, that’s right! I actually have over 10 full music journals, and over 500 songs I’ve written.

ME: Nice! Will we hear an original album from you in the future?

Jurnee: Yeah! I’ll actually be in the studio this week, working on my first project, and I’m so excited. Hopefully once it’s finalized, I can premiere some of the songs on a couple dates of the tour and see how it goes.

ME: I’d say go all out stylistically. Explore every possible avenue of music you can, be it soul, alternative, even heavier stuff. I bet you’ll do something great!

Jurnee: Just that I’m so excited to meet all of y’all, new music is in the works, and I can’t wait to continue this journey with you — pun intended!

I come from a family who is passionate about all things music. I learned to sing at an early age, and by 13, had my very own Fender Strat guitar. I tried my hardest at learning all that I could. Because I was born with cerebral palsy, I had to teach myself an adaptive playing style. I learned to write and record my own music, despite these difficulties. In college, I started making great use of my writing abilities by reviewing music, as well as copy editing. I guess it's best to stick with what you know, while welcoming a fair challenge at the same time.
Previous From That Summer (Vol.1) Compilation “Savage Love” by Nina Amelio
Next Interview: Rolo Tomassi @ Download Festival 2018