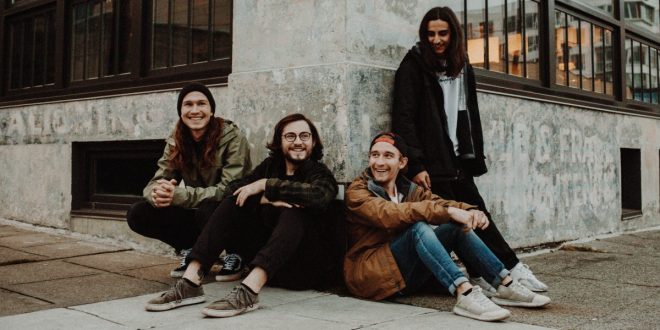 New Illinois based rock band Homesafe certainly might turn heads with a song called “Vanilla-scented Laser Beams.” At the very least, it caught my attention.

This recent single, from their debut album One, comes after a long line of self-released EPs. In the four years since Homesafe’s formation, they’ve been busy making music and amassing a following to carry them to these heady heights. And now, all of that hard work comes to fruition with this LP.

Homesafe’s sound falls somewhere in between Nirvana and Foo Fighters, as if they’re a band of proto-Dave Grohls: a bit more punky and juvenile, but there may well be potential in there.

One greets you with “Point Blank,” a pretty catchy rock song. It’s all gritty guitars, dreamy dissociated vocals, and angsty lyrics. “Say Something” has a sprinkling of hardcore tone in it to up its game a bit, which actually compliments the moral arguments hidden within.

As is to be expected with a song called “Sadistic Society,” they can ramp up their heaviness even further to continue some more socio-political messages with their music. It’s a little more interesting as a song for me personally. Its tune is somehow both discordant and harmonious at the same time; it makes you feel uneasy to listen to it, yet you enjoy it all the same.

The track which sparked my interest, “Vanilla-scented Laser Beams,” turned out to be one of the most aggressive-sounding love songs I’ve come across yet. It’s the exact opposite of what you’d expect from a ballad, but angrily suggesting to give something a chance is quite a nice, honest sentiment I think we should all take on board.

“Stay Free” is a bit mismatched when it comes to harsh vocals and a softer tune. Considering Homesafe had done quite well with their genre-mixing up until this point, I was a little disappointed to hear a song sound so jarring. At least it’s followed by “Get It Right,” a song which really shows off their Foo Fighters inspirations. In the least surprising turn of events, One rounds off with a slow acoustic love song to no one in particular with “Sideways Sleeper.”

Homesafe’s debut album certainly isn’t bad, indeed it’s downright delightful to listen to at times. But part of me feels like they rely too heavily on their cited influences for song structure and tone. When their originality breaks through, it’s a gorgeous sound and one that I wouldn’t get bored of quickly at all. They know what they want to do with their music, but they might not have quite nailed the medium just yet. But there’s still time for them to grow as a band, and I sincerely hope they do.

Pick up One in store or online right now! http://smarturl.it/homesafeONE

Freelance arts, culture, and music journalist. Lots of words and some radio. Studying for an MA in Media and Journalism. Trying their best.
@lozreviews
Previous Calling Kings Release New Video for “Demon Suit”
Next From That Summer (Vol.1) Compilation “Savage Love” by Nina Amelio