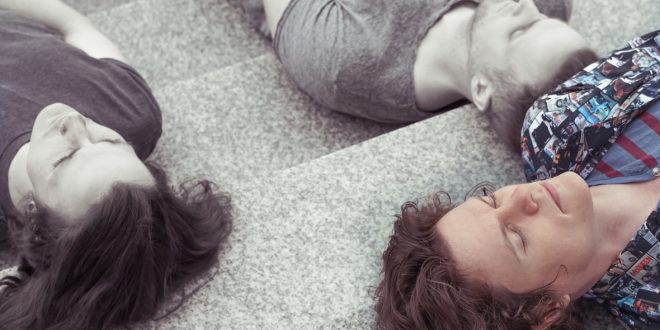 Manchester native Johnny Lucas has made a name for himself around the UK music scene and now he’s ready to take on the US with his new band, LUCAS. Produced by Cage the Elephant’s Lincoln Parish, “Reverse” is the latest single from the indie rock trio’s upcoming EP High Wire. When the band first played the song for Parish, he became adamant that this was the most powerful song to go on the EP and went as far as enlisting the help of Cage The Elephant’s string quartet. The lyric video features falling imagery that is, you guessed it, in reverse.

“Reverse was the last song written in the previous Ten Ten Publishing Office
building in Music Row where so many hits have been written,” says frontman Johnny Lucas. “Myself, Ronell Coburn and Bryan Tewell were determined to make this a soul jerker as at that time so much was going on. When we thought of the hook a poster ofthe Beatles fell off the wall so we took that as a sign and it led us to the whole falling imagery thing.”

After touring around the UK and Europe as a one-man show replete with beatbox and looping magic, Johnny decided to make the move to Nashville and form a full band. It was there that they honed their distinct blend of British and American flavors at Parish’s Talkboxrodeo studio. Johnny’s solo run received heavy rotation on BBC, major appearances at Glastonbury and Isle of Wight Festivals, and even a nod from the almighty Jimmy Page who told Johnny “I loved what you did with the loop pedal. There was so much going on it was like a 5-D experience.“

Listen to “Reverse” on Spotify. The official music video will be released soon.