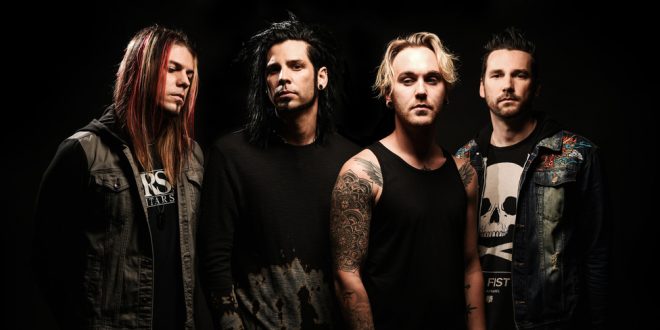 The firstt time I came across Like A Storm, it was a bit of a coincidence. I never heard about the band before when I saw them first time live in Vienna two years back, but honestly, there are only very few support acts that caught my attention this much and I’ve been following them ever since.

It’s been three years since this hard rock band from New Zealand released their last studio album, so I was really curious about their new record – Catacombs.

The album starts with a bit haunting ‘The Devil Inside’, you can hear it is Like A Storm from the beginning, mostly thanks to the didgeridoo. It can be also heard on tracks such as ‘Catacombs’ or ‘Hole In My Heart’, even though not as prominent as on the first track.

Apart from the signature didgeridoo and of course the hard rock guitar riffs a welcome diversity is offered by the keys shinning through some of the songs more than the others. Especially the ‘Catacombs’ are a nice combination of all the instruments and I would honestly prefer more songs like this one.

‘Bullet In The Head’ provides even a deeper and more massive scale of heaviness on the album. No mistake there, Catacombs as a whole is full of that hard and heavy sound, tracks like ‘Hole In My Heart’ and ‘Complicated (Stitches And Scars)’ being the perfect proof of that, but Bullet is most probably the heaviest one here and really stands out.

You can also find a bit slower laid back track here – ‘Out Of Control’, but you would be probably trying to find somewhat of a ballad or a slow song on the album without a success. Honestly, this one is as soft as the album gets and in my opinion, a really slow track would not even fit with such a powerful brutal songs that resonate in Catacombs.

Throughout the whole record a certain dark vibe and dark themes can be heard. The song names like ‘The Devil Inside’, ‘Complicated (Stitches And Scars)’ or ‘Bitterness’ are a dead give away, too. Dealing with inner demons and darkness inside of us echoes through the whole album and is the main theme of this album I am sure many of us can perfectly relate to.

The distinctive sound of didgeridoo is what really makes the songs stand out and they add to the unique sound of the band created by guitars and Chris Brooks’ vocals. Fortunately, it is not used too widely to get boring and repetitive. On the other hand, at least for me, some of the songs without the instrument sound a little bit generic for me and remind me of some other bands a little bit too much. Still, a clear progress can be seen on the album from the previous releases and the band has a high potential to step up their game even mote and get even bigger. They would surely deserve so.

Overall, even though this might not be on the very top of my list of the albums released this year, it is still very solid and enjoyable record. The competition is pretty tough after all, but even despite that I am sure that Catacombs won’t get lost among the tons of records that come out nowadays and I can only suggest giving Catacombs at least a listen. Even more, I would suggest for you to catch this band live, their shows are always a treat and I can already imagine, how great will the new stuff on this record sound played live – and I am already looking forward to it very much.