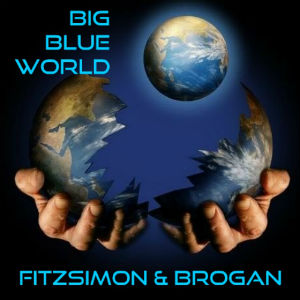 “Big Blue World” is the brand new, vibrant single release from Fitzsimon and Brogan (FaB). Taken from the forthcoming (June 22nd) album by the same title, the track is a lush, melodic and energetic blend of pop melodies, rock grit and indie production aesthetics, making for a sound that feels heartfelt and authentic from the moment you press play. The London-based duo set out to release a piece of music that feels compelling and genuine, highlighting the duo’s chemistry, as well as their ability to create beautiful, richly nuanced melodies.

Both musicians had collaborated earlier on in their career, most notably as members of “Pretty Blue Gun”, their former band. After releasing two well-received albums with the group, Fitzsimon and Brogan decided to focus on their solo project instead, allowing free range to their creativity. Their music could be compared to the work of artists as diverse as Elvis Costello, Jimmy Webb, The Beatles, David Bowie, and many more, echoing the best rock and roll and pop traditions.

ABOUT FITZSIMON AND BROGAN: Neil Fitzsimon, the songwriter, and Bee Brogan, the vocalist, aim to produce “Pure Pop For Now People.” Preferring to remain faceless in an industry that holds image in high regard, the pair have gone on to form a songwriting/production partnership that led to placement of their songs in Film and TV. They also wrote a musical, Jack Dagger, which was showcased at the Greenwich Theatre, London for the Musical Futures Award. It was also showcased at the Bridewell and the Royal College of Music in London. They have also just had a song placed in a USA Sci–Fi Feature film.  The duo recently had a track reach number 3 on a French national download chart.  Their track, “This Is Love” earned the duo Semi-Finalist status in the Eurovision Contest.