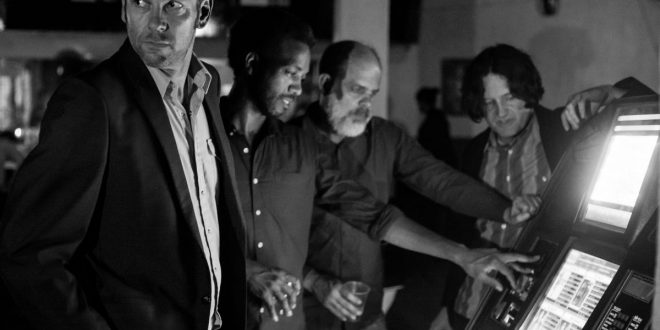 The Color Forty Nine, by The Color Forty Nine, is the new EP from this San Diego based band with songs that tell stories about the area in which they reside being on the border of Mexico, particularly Tijuana. This is an area that makes for good fictional stories laced with their own truths. The band consist of members with previous and current projects such as little white teeth (Phil Beaumont), the Black Heart Procession (Matt Resovich & Jason Hooper), the Album Leaf (Matt Resovich), maquiladora (Phil Beaumont), System’s Officer (Jason Hooper) and the John Meeks Band (John Meeks, Matt Resovich).

If not for the voice of Phil Beaumont this would sound a lot less extraordinary as instrumental pieces, so it is worth mentioning where he comes into the picture of this music, adding just the right vocal sparks to the stories to make them shine the way they do. It simply ups the game in that way and gives the listener much to focus on besides the musical arrangements. But make no mistake this is a fully integrated band sound, it’s just that there’s no denying how awesomely Beaumont sings, all which is evidenced well before the songs are over, if that’s any indication of how good they truly are.

“I Will” is the first track to prove that and much more, with no hesitation from Beaumont and CO to show what’s going on with this very dramatic and mostly acoustic release. This is a song that reminds of “Under The Milky Way Tonight” by The Church. It may not even be influenced by it, but it plays with the same haunting sort of effect. It’s probably the best choice for a lead off single, but it’s certainly not the only pick for that, as there are others which follow along the same set of great principles. It just so happens to be perfectly placed as the opener to what is all fantastic material.

“Hours Made” is a faster-paced track and one of the more energetic tracks to be honest, and the results are even mixed because it’s one of two tracks where things get wildly different. This is about as fast as the songs get, but nevertheless they do their part to break up the thread of what are slower dominated, but massively enjoyable tracks. The same goes for the vocals on “No Guarantees” with its languidly soothing outcome. It’s really where the album starts to peak and never look back as they come on strong and never let go.

Everything about the track, “Storyteller” is worth savoring every time you hear it, and so far it’s prompted the most plays out of my time to review this artistically fortified collection. It serves as the embodiment of the album and the rest is absolutely tasteful gravy on top of it, all checking out as superior works including the grand finale in the shape of “Side Of The Road” and its closing perfection. This release at the 2018 half mark contains some of the best indie music to be heard thus far in the year.

Stephen Vicino is the founder of MusicExistence.com. He created this site to give talented musicians a voice and a way to be discovered.
@@svicino
Previous Shaman Elect – Rock Jazz Electronica from Brooklyn Release Mind The Ether Today
Next Gallery: Iya Terra at Reggae In The Desert in Las Vegas, NV 06/09/18